Joy at $10m violin gift in land of beer and cricket 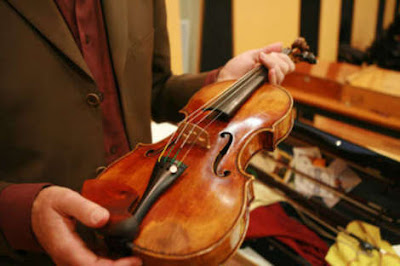 
IT IS one of the finest instruments in the world, but Richard Tognetti has admitted he is a little cautious playing a violin worth $10 million.

"Rather than my best, it can bring out my worst," the Australian Chamber Orchestra's artistic director said yesterday. "I'm in awe of it, but it's rapidly becoming part of me."

The Carrodus, a violin made in 1743 by Giuseppe Guarneri del Gesu, is a gift to Tognetti and the ACO from an Australian benefactor who does not want to be named. One of only 100 made by del Gesu, it has been described as "one of the four or five finest of the finest" violins in the world, by the respected London dealer Charles Beare.

"It's so special," said Tognetti. "Apart from the fact that it sounds so beautiful, it hasn't been played since 1953. [The sound] is darker and richer. The weeping violin suits my style."

The world's best violins were made in northern Italy in the 18th century and Antonio Stradivari and del Gesu were the kings of the violin-making world. Del Gesu was the "maker of choice" for some of the greatest virtuosi of the 19th and 20th centuries including Nicolo Paganini.

Tognetti would not reveal the identity of the benefactor, but let it slip that he was a prominent businessman.

"He wants the focus to be on the violin and music, not him," he said. "Australia is not used to spending money on art. To put it into perspective it's one quarter of a Monet, or a decent-sized mansion in Vaucluse."

Before he acquired the Carrodus, named after John Carrodus, a leading English violinist of the Victorian era, Tognetti played on a 1759 J.B Guadagnini violin valued at $1.2 million. He never dreamed he would play on a del Gesu. "It has regal majesty," he said.

Tognetti never lets the violin out of his sight and keeps it in a safe when he's not playing it. He does not think it will be stolen - "it's essentially priceless" - but the risk of damage means he treats it with extreme respect.

Tognetti is full of praise for the investment the unnamed benefactor has made in cultivating Australian culture.

"It's an example of the European style of philanthropy," he said. "It's all too rare in this country of beer and cricket."

A good news story, something quite touching about it.
I wonder if the Violin is Tax Deductable ?