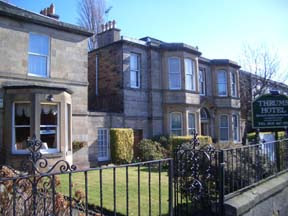 http://news.bbc.co.uk/2/hi/uk_news/scotland/edinburgh_and_east/7037146.stm
A large number of antiques worth tens of thousands of pounds have been stolen from a house in Edinburgh.

It is believed the house in the Minto Street area was broken into some time after 20 September.

Among the items stolen were paintings, furniture, and other assorted antiques, worth an estimated five-figure sum.

Because of the large number of goods stolen, it is thought a van was use and the thieves may have made more than one visit to the house.

Police want anyone who noticed any suspicious activity in the area recently to contact them.

A police spokesman said: "A large quantity of items worth an estimated five-figure sum have been stolen from a house in Minto Street.

"As well as the obvious cash value of the goods, they also have a great deal of sentimental value to the owner, who is understandably distressed at what has happened.

"We think that a van may have been used to transport the goods, so we want anyone who has noticed any suspicious activity in the area over the past couple of weeks to contact us immediately."

More to this than meets the eye, valuation is refreshingly vague !!
Posted by Art Hostage at 2:38 pm