Stolen Art Watch, The World Just Got Smaller, If you are a Stolen Artwork !! 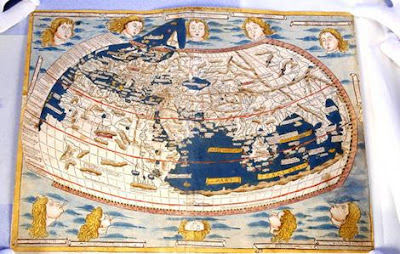 AFTER a journey around the world, a stolen 1482 map based on the work of the ancient astronomer and geographer Ptolemy has been recovered in a Sydney art gallery.

The map, known as the Ulm Ptolemy World Map, illustrates what was then known about the world and is described as "perhaps the most famous and highly sought after of 15th-century world maps, and certainly the most decorative".

Valued at $160,000, the Ptolemy map was stolen from Spain's National Library and made its way to the US, where it was bought on the internet by Simon Dewez, owner of the Gowrie Galleries in Bondi Junction.

"I had absolutely no idea it was stolen," Mr Dewez said yesterday. "I thought it was a fantastic buy, a rare opportunity."

The map has been recovered and is with the Australian Federal Police, who sent photographs to the National Library in Madrid. "They've confirmed it's their missing map," a spokesman said. "The gallery surrendered it willingly."

Spain will apply to Australia to have the map returned. A legal dispute over ownership is not expected.

Mr Dewez declined to name the dealer from whom he bought the map but described him as a reputable dealer who had refunded him.

Mr Dewez, whose gallery has a 120-page catalogue offering rare maps for sale, bought the map on behalf of a client as a superannuation investment.

He bought a second-edition Ulm Ptolemy World Map, printed in different colours in 1486, five years ago from a private European collector. "It's equivalent to buying a rare edition," Mr Dewez said. "The Ptolemy map is not only important, but it's beautiful as well."

The stolen map was one of 12 maps and other documents cut from a 16th-century edition of Ptolemy's Geographia, based on the original work by Claudius Ptolemy in the second century.

Best known as an astronomer, Ptolemy (AD 85-165) compiled Geographia from existing records and by detailing the geographic co-ordinates of 8000 locations. He was the first to visualise a great southern land mass uniting Africa with Asia and enclosing the modern Indian Ocean.

The maps he drew were hard to copy and were lost over time, but Geographia was the most influential record of the known world for the next 16 centuries.

World maps based it were produced in 1295, 1397, 1401 and 1427, but because Ptolemy believed the world to be smaller than it actually was, they all contained distortions, a problem not solved until the end of the 18th century.

In 1482 in the German city of Ulm, Leinhart Holle produced the Ptolemy World Map, including Scandinavia and more recent information. It was a woodcut by the engraver Johanne Schnitzer.

A second map stolen from the Spanish National Library was recovered by the FBI from a New York collector about the same time police became aware the Ptolemy World Map had found its way to Australia.

The loss of national treasures caused outrage and led to the resignation of the library's director.

The thief is believed to be a researcher who had access to the closed section of the library that contained the documents. He left Spain before the thefts were discovered in August.

Madrid - A man who has confessed to stealing valuable ancient documents from Spain's National Library has handed over some of them to an Argentine judge, press reports said Thursday. Cesar Gomez Rivero, 60, a Spanish citizen of Uruguayan origin and resident in Argentina, returned eight of the 19 documents he is believed to have stolen during visits to the library between 2004 and 2007.

Two of the most valuable ones among the stolen documents, centuries-old copies of world maps by 2nd-century Greek geographer Ptolemy, have allegedly been located in the United States and Australia.

Gomez took the documents because of his "passion for history and art," his lawyer was quoted as saying.

But when the man noticed that his attempts to sell some of the documents got his allies in trouble, he repented, the lawyer added.

The judge in Buenos Aires left Gomez free on bail and ordered him to report to the court regularly.

Gomez is believed to have cut the documents from books with a knife he smuggled into the library. The scandal broke in August, prompting the resignation of library director Rosa Regas.

In a relatively short time, these stolen maps went around the world.

It shows just how small and accessible the globe has become.

I wonder if Philip Cornford has caught the Art Sleuth bug ?

Searching for stolen art is like Vegemite, you either love it or hate it !!

The International Art and Antiques trade has not covered itself in glory, yet again, another example of distasteful practice !!
Posted by Art Hostage at 6:31 pm