Stolen Art Watch, Miserly Policing on the Cheap Responsible for this and other Robberies !! 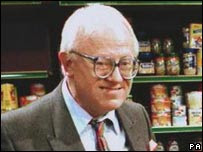 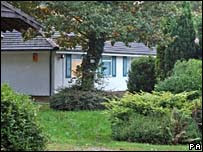 LONDON (Reuters) - The wife of former "Coronation Street" star Ken Morley was tied up by robbers during a burglary at their home, police said on Sunday.

Three men, wearing balaclavas and dark clothing, forced their way into the couple's home in Clayton-le-Woods in Lancashire on Friday evening.

Morley, 64, who became famous for his role as bumbling shop manager Reg Holdsworth in the long-running soap, was not home at the time, but the robbers bound his wife Susan's wrists and ankles using cable ties.

They demanded money, jewellery and the whereabouts of the safe before locking her in a room and searching the house. Police said the men, who were described as in their 30s with Irish accents, escaped with some jewellery.

Susan Morley told the People newspaper that the men had said they would torture her and her pet dogs.

"I was threatened with a crowbar and it was horrendous -- utterly and totally horrendous," she said. "They threatened to kill me and were shouting in my face."

She later managed to loosen the ties and went to a neighbour's house to raise the alarm.

Ken Morley, who has also starred in the comedy "'Allo 'Allo" and the sitcom "Hardware", said it was the second time their home had been raided in recent years.

"It is a sign of the times that a woman is no longer safe, even in her own home," he told the People. "It's like an epidemic of crime is sweeping the country and there is just no deterrent."

Police said the robbery might be linked to a similar burglary in the county last month.

"This address has not been specifically targeted because it is the home of Mr and Mrs Morley," said Detective Inspector Neil Haworth.
See also:
http://news.bbc.co.uk/2/hi/uk_news/england/lancashire/7032214.stm

Art Hostage comments:
This robbery need not have happened.
Earlier this year, this criminal gang robbed an Art Dealer of multi-million pound Lowry paintings by holding a knife to the throat of a two year old girl during the robbery, see below:
http://arthostage.blogspot.com/2007/05/armed-lowry-theft-can-be-solved-for.html
http://arthostage.blogspot.com/2007/06/low-lowry-rewards-low-lowry.html
Such was the outrage at this act, an Underworld informant offered Police a deal, whereby the names of the robbers would be given and their next celebrity target revealed.
The fee was £100,000, to be paid once the robbers were caught and convicted.
Police refused, saying they would only pay small rewards at their own discretion.
The Underworld informant backed off and left Police to investigate on their merits.
Then some time later this happened, see below:
http://arthostage.blogspot.com/2007/07/stolen-art-watch-lowry-gang-strike.html
And this:
http://arthostage.blogspot.com/2007/06/collecting-art-will-prove-fatal-very.html
Again the Underworld informant offered Police the names for a fee, to paid after Police had arrested the gang.
Again Police refused and this latest robbery of a TV celebrity's wife is the result, as are a number of other robberies that have not made the media recently.
"When you pay peanuts, you get Monkey's"
The Police are meant to protect the public, even if it means they have to pay for the vital information that will prevent armed robberies like these that have occurred since the first offer to give the names and details of the robbers for a fee.
Police may indeed arrest this gang in the future, that gives no comfort to those who have been robbed unnecessarily since the first offence.
Any Police success in arresting this gang will be viewed as a Pyrrhic victory.
Posted by Art Hostage at 2:48 pm