Stolen Art Watch, If You Vant a Vatch, Buy a Vatch, Stop Vatching the Vatches in the Vindow !! 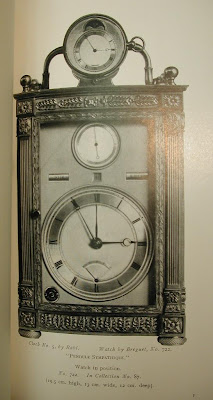 Dozens of rare and priceless clocks stolen from the L.A. Mayer Museum of Islamic Art in Jerusalem 24 years ago, in a theft that has mystified investigators, have returned home and are soon to be presented to the public.

Among the items, located in August, 2006, after the museum's director received a telephone tip from a Tel Aviv watchmaker, the rarest and most expensive clock is a gold and rock-crystal pocket-watch made over a number of years for Marie Antoinette by the French watchmaker Abraham Louis Breguet (1747-1823).

The theft of 40 items from the original collection of 100 clocks, one of the most important in the world, occured on Friday night, April 15, 1983, when thieves managed to bend the bars on a back window of the museum and use a ladder to get inside, covering their presence with a large truck, which they parked in the back, taking advantage of the fact that the alarm system was broken, and the guard was stationed in the front. On Sunday morning when the theft was discovered, police said it had clearly been "commissioned" because the thieves knew to take only the most expensive items in the collection.

The rarer items were known to dealers and galleries the world over, and the search was intense and wide-reaching, but fruitless. Monetary rewards posted by the museum and its insurers went unclaimed.

Then, in August 2006, a break came in the notorious case: The museum's veteran director, Rachel Hasson, received a phone call from a Tel Aviv watchmaker who told her a young lawyer had phoned and invited him to her office to appraise 40 clocks she had in her possession. The watchmaker immediately realized these were some of the clocks stolen from the L.A. Mayer Museum of Islamic Art. The lawyer told him that the clocks belonged to a foreign client of hers.

Hasson immediately reported the information to the museum's board of directors, and a few hours later they arrived at the lawyer's office, only to find that the clocks had been returned to their bank vault. They showed the lawyer a catalog of the clocks and she identified some of them and confirmed that they belonged to her client, a resident of the U.K., who had inherited them following the death of her partner. The lawyer said she would be willing to return them if she were compensated financially.

The board set up a meeting with the lawyer for the next day, when she was to show them the clocks so they could confirm which items from the collection were included. But on the way back to Jerusalem, she called the board chairman, Eli Kahan and said she wanted to finish up the deal in one day and that her client had one condition: to keep her name out of it and do everything through her attorney.

The next day, the attorney showed the board three worn cardboard boxes, with the 40 rare clocks, wrapped in newspaper, including the Breguet creation for Marie Antoinette and another Breguet creation from 1819, known as the "Sympathique," which ran on a system in which a watch placed in a recess of the clock was automatically set and reset, and an 11 cm-long "pistol clock" created at the beginning of the 19th century in France.

Excitedly, the board members spent hours going over the collection. Most of the items were fairly well preserved, but some where damaged. After a brief negotiation, Kahan gave the lawyer a check of not a large amount in return for her assistance. The clocks were brought to Jerusalem and placed secretly in a safe so the story would not get out, and the police were informed of the developments.

The months that followed saw negotiations with the insurance company, which had meanwhile paid the museum's claim on the lost clocks, and work to restore the damaged clocks and prepare them for exhibition once again.

Meanwhile, the identity of the thieves remains a mystery. However they are believed unlikely to have been inveterate watch collectors, but rather local operators, at least two in number. They apparently dismantled some of the clocks, removing and selling gold and jewels. The most expensive clocks were apparently too familiar to be sold and thus remained in their possession over the years.

The clocks, which are unconnected to Islamic culture, are part of the collection of Sir David Lionel Salomons, who in 1855 became the first Jewish mayor of London. They were donated by his daughter, Mrs. Vera Francis Salomons, a British philanthropist who founded the L.A. Mayer Museum of Islamic Art and named it after her professor of Islamic studies and rector of the Hebrew University, who was also a collector of rare clocks.
Art Hostage M.A. B.A. (Hons) A.H.E.C. Comments:
In some ways this is a similar case to the Da Vinci Madonna, however, authorities in Israel seem to have taken a softer line with the Lawyers.
Alternatively, Israeli law may be different and allow this kind of buy back and also allow a ransom to be paid.
The Israeli clock case shows the Museum working without informing authorities until it had already recovered its stolen property, something illegal in the UK.
It is only after the event that Israeli authorities have the chance to consider if any laws were broken and if any criminal charges should be sought.
Here in the UK, Scotland in the Da Vinci case, the private investigators, as soon as they were contacted about the stolen Da Vinci Madonna, went running at breakneck speed to "Tell the Teacher" sorry, snitch, sorry, inform authorities.
Do you remember the Weasel featured little turds at school, who would run to the teacher and snitch, opinion was always that the Little Turds would grow up without friends and become Police officers, still without friends, other than their fellow little turds in the Police.
It must be said however, that there have been attempts to recruit decent considerate popular and competent people into the Police, but there is still an element of the Weasel featured little turd syndrome at the core of all aspects of law enforcement.
This means the public are even more reluctant to come forward and help, if those requesting help are the very same Weasel featured Little Snitching Turds, who were hated universally at School.

The law enforcement reaction to recovering stolen art varies from country to country and depends on how powerful those negotiating the return of stolen art are.
The Turner case in point, where the players were establishment figures who clearly paid a multi-million pound ransom. Then a media back-out followed.
The Titian recovery by the much maligned Charlie Hill, where he paid David Dudden £15,000 deposit, then £85,000 post recovery, who in turn paid the money backwards, another buy-back. Charlie Hill was warned he would be arrested if he did this kind of recovery again. Since the Titian how much stolen art has Charlie Hill recovered, none, zero, zilch !!
The Da Vinci case has thrown down the Gauntlet to the legal profession and is asking questions about client attorney privilege.
This is not personal, it is a considered campaign to undermined lawyers and make defending accused that much harder.
The issue of legal aid has been another way to put out of reach, competent lawyers for most defendants, giving Prosecutors an unwarranted advantage.
This march to tip the scales of justice in the prosecution's favour is fraught with danger and will inevitably lead to the increase of unsafe and corrupt convictions.
There is a rumour that the use of underworld supergrasses in on the agenda, so keep an eye out for that !!
Upon another note
When Art Hostage was a lad, he used to go and stare at the expensive watches displayed in a jewellers window.
The Jewish owner came out one day and exclaimed:
"If you Vant a Vatch, buy a Vatch, stop Vatching the Vatches in the Vindow !!"
Subsequent to this first meeting, Art Hostage was taught a great deal by this wise man, who became somewhat of a mentor and good friend.
This Jewish jeweller took Art Hostage under his wing and allow him to learn about buying and selling of jewellery and watches.
Art Hostage used to "run" items on a sale or return basis, even dined with the family.
When the Jewish Jeweller died, he left Art Hostage a Rolex Gold pocket watch and Gold watch chain, the very same one Art Hostage used to look at as a young lad in the Vindow !!

Art Hostage, when asked if he is Jewish replies:
"Unfortunately, that is an Honour for which God has failed to Bestow upon me"