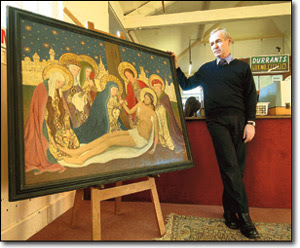 An unusual mystery is intriguing the art world as a remarkable painting has emerged from under a layer of paint which has hidden it for decades.

The stunning 19th century work, which shows the followers of Christ weeping over his body at the foot of the cross, was hidden by a different, inferior version of the same picture. It could have been a technique to conceal a stolen painting or to smuggle it out of the country, or the painting may have been toned down for religious reasons.

The canvas will go under the hammer in Beccles next month after being brought in from a local house clearance. No-one knows how much it will make, but it has stirred up considerable interest in the art world. The telephone at Durrants in Beccles has been busy with phone calls from dealers since the picture was advertised in a specialist antiques publication.

Auction rooms manager Miles Lamdin said: “When we looked at it we realised the paint was peeling off and underneath was a much better painting.

“We don't know why it was painted over, but they used paint that peeled off very easily. It is almost as if it had been done deliberately as a temporary measure. Usually when you get canvases that have been painted over the one underneath is pretty grim. The exceptions were when during various wars paintings were smuggled out of the country by painting something worthless on top.”

The 40in by 50in canvas, depicting the Lamentation over the dead Christ, is English and in the Gothic revival style. Mr Lamdin believes it would have been commissioned by some kind of religious body.

Penny Killingbeck, the Norwich-based restorer who spent three painstaking weeks removing the top level of paint with nothing more than scalpel blades, warm water and cotton wool, said: “In my 35-year career I have had five or six pictures like this where a picture has been deliberately obscuring another one. Usually it is because people wanted to take paintings out of the country, for example before the second world war.”

But she said that in those instances the painting on top was very crude, which was not the case here. “The painting on top was incredibly detailed and would have taken a long time to do. Maybe someone wanted to dull and grey it down for religious reasons. Maybe they thought it was too Catholic and gaudy.

“The one on top is a very dreary picture. It is unremarkable. The one underneath is extremely good.”

The later artist replaced the Virgin Mary's elaborate embroidered robe with a much simpler version, while a detailed cityscape covered in gold leaf also disappeared when it was painted over.

Whatever it goes for, it is unlikely to benefit its original owner or their family. The painting was part of a house clearance and the clearance company - which has not been named by Durrants - will have paid a fixed sum for the entire contents of the house. Mr Lamdin has no idea whether the person the painting belonged to is alive or where it came from, which makes it difficult to find out more about its history.

The painting will go under the hammer at Durrants in Beccles on February 8.

Do you recognise the picture or do you know who it belonged to? Contact the EDP on 01502 712060 or email sarah.brealey@archant.co.uk.
How the painting looked before being restored 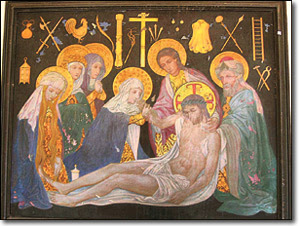