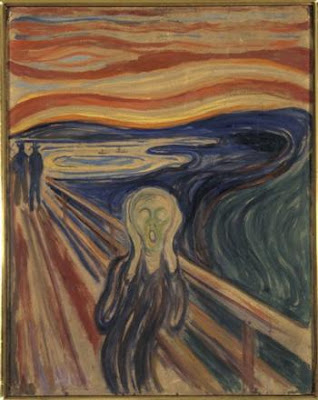 
OSLO, Norway (AP) — The Norwegian Supreme Court on Friday increased the sentences of two men convicted in the theft of Edvard Munch masterpieces "The Scream" and "Madonna" and ordered a new trial for a third convicted man.

The paintings, which are considered priceless, were stolen in August 2004 in a daylight raid on the Oslo city-owned Munch Museum. They were recovered by police nearly two years later, and are undergoing repairs for scrapes, punctures, loose paint, and moisture damage.

All three men appealed their April 2006 sentences from a lower court, which ranged from five to 9 1/2 years, last month.

In its unanimous 12-page ruling, Norway's highest court said sentences for two of the men, Petter Tharaldsen and Stian Skjold, were too low considering the "irreplaceable national cultural value" of the paintings.

"The sentence should therefor be somewhat higher ... than if it had been the theft of money of the same economic value," said the court, which is a final ruling for the two.

The paintings are insured for $141 million, but experts say their real value cannot be estimated.

The court increased Tharaldsen's sentence by one year to 10 1/2 years, and Skjold's sentence by six months to six years. Under Norwegian law, higher courts frequently increase sentences when considering appeals.

But the court rejected the conviction of a third man, Bjoern Hoen, who had been sentenced to 5 1/2 years in prison, saying testimony in his trial may have been tainted, and sent his case back to the lower courts for a new trial.

Two of the key witnesses against Hoen, including a police informant, had agreed to work together on a book about the thefts without informing the courts or the defense attorneys of their plans.

The Supreme Court wrote that testimony by those two witnesses "could have been judged differently if the court had been given information about the book project, with consequence being that the question of guilt or sentencing being evaluated in a different way."

Munch's emotionally charged painting style became a major influence in the birth of the 20th-century Expressionist movement. Munch died in 1944 at the age of 80.

The main reason why criminals target public museums and buildings is because they are seen as low risk for potential high return.

Mandatory 10-20 years jail time for high value/Cultural art theft from public buildings or museums is all that is needed to curb the intentions of the criminal underworld.

This will lead to dispersal of all art theft into the private art collecting circle, who are better placed to protect their art collections.

I think I am safe in saying that both law enforcement and the criminal underworld agree stealing iconic artworks is a headache to be avoided at all costs.

The headache for law enforcement is when a high profile iconic artwork is stolen, precious resources are diverted from front line crime fighting to try and solve the art loss.

Sometimes millions are wasted on investigations that only result in minor convictions and none of the stolen art is recovered. This lack of success does nothing for public support of law enforcement especially if the iconic artworks are not recovered.

However, sometimes the extra resources and inter-agency co-operation do have positive results for law enforcement, as seen in the Da Vinci Madonna case.

The headache for the criminal underworld is the disruption to other criminal activity caused by Law Enforcement pursuing the stolen art.

O'h, if only there could be a Modus Vivendi between law enforcement and the underworld, whereby art theft from public buildings and museums is off-limits, and when these art thefts do occur, the underworld facilitates the swift return of the stolen art without reward, just credit of a metaphorical kind.

Historically, Law enforcement Art and Antiques investigators had a cordial relationship with the criminal art world and if an iconic artwork was stolen, word would go out, in a polite but firm manner, that the stolen art work must surface, otherwise there would be random raids disrupting regular everyday dealings.

The criminal art world took this on board and the said stolen artwork would be recovered within a week.

Today however, the art world, both criminal and so-called legitimate world are terrified to even acknowledge being in receipt of information about stolen art for fear of being prosecuted under the 2002 proceeds of crime act.

This has led to a void and a big gap in intelligence gathering.
Whilst some high profile art thefts get solved in the media spotlight, the mainstream everyday art theft goes unsolved and the public bear the brunt of being targeted unabated.