Stolen Art Watch, Sunday Round Up !! 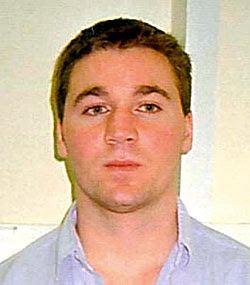 A NATIONWIDE hunt is underway for a serial criminal believed to have committed hundreds of burglaries throughout the Cotswolds and the south of England.

A £1,000 reward is being offered for information on the whereabouts of 33-year-old Peter Sonny Martin O'Halloran, who has been named on the national Crimestoppers most wanted website www.crimestoppers-uk.org.

O'Halloran, who sometimes goes by the name of Peter Sonny Noon or other aliases, has been a thorn in the side of police since he escaped from Ford open prison in February 2004.

An appeal on BBC TV's Crimewatch programme that year failed to elicit any responses.

In January 2005, the Journal reported that he was being linked to a series of 27 burglaries in south Warwickshire, including some in Shipston, Tredington, Long Compton, Great Wolford, Stourton, Alderminster, Halford, Welford-on-Avon, Haselor and Napton.

At the time, police also linked him to around 140 burglaries in Gloucestershire, Oxfordshire, Berkshire and Wiltshire and it was thought he had stolen millions of pounds worth of jewellery, silverware and antiques.

He is now believed to have committed a large number of burglaries in the Cotswolds, Essex, Cambridgeshire, Oxfordshire, and Wiltshire. He may also have targeted homes in the West Mercia police area, Hampshire and Suffolk.

Detective Sergeant Dave Doherty of Gloucestershire Constabulary is leading the hunt for O'Halloran.

He said: "O'Halloran has evaded us for some time now and we firmly believe he is still active in targeting residential properties and stealing large values of jewellery amounting to hundreds of thousands of pounds.

"We would appeal for anyone with information on his current whereabouts to get in touch, but not to try and apprehend him themselves as he is obviously extremely keen to evade arrest."

In January 2005, O'Halloran was described as white, around 5ft 10ins tall, with green eyes and short wavy brown hair. He has scars on his right forearm and large feet - size 14 or 15.

Anyone with information on O'Halloran's whereabouts should ring Gloucestershire Constabulary on 0845 090 1234, or Crimestoppers anonymously on 0800 555111.
Art Hostage comments:
One would have thought that a man alleged to be responsible for many hundreds of thousands of pounds worth of art thefts would command a much higher bounty on his head.
Once again Police show how cheap they are.
I bet if the reward was £100,000 then someone would turn Sewer Rat.
Until then the public will have to make do with crossing their fingers and hoping they do not become the next art loss victim.
In this vacuous world we live in, people only respond if the reward risk factor is worth taking.
At the moment the risks of becoming a Sewer Rat, Snitch, far out way any miserly reward offered.

Millions of euros worth of jewellery
http://www.gairrhydd.com/news/863/a-real-life-italian-job/


Thieves posing as policemen stole several million euros worth of jewellery from a Milan showroom on the day of the Oscars.

Seven men, dressed in police uniforms, came through the cellar wall of the showroom on Sunday February 24 before tying up staff and running off with some of Damiani’s most valuable pieces.

It has been reported that prior to Sunday’s heist the robbers had dug an underground tunnel from a building under construction next door to the jewellery store.

The seven men, unarmed and unmasked, crept through the tunnel and came through the wall as staff above them in the store prepared the jewels for a celebrity Oscars party.

The gang proceeded to burst into the showroom, tied the staff up with plastic cable and sticky tape and locked them in the bathroom.

The manager was then taken to the safety deposit room and forced to empty the lockers.

The robbery was conducted in a matter of minutes.

The thieves then made their escape via the same tunnel through which they entered, leaving very little trace.

Police say it was an extremely professional job and are working on a theory that the robbers may have had some inside knowledge.

The real value of the items stolen is not yet known, but it is thought to be millions of pounds worth of gold earrings, necklaces, bracelets and rings, which were all studded with diamonds.

Damiani had supplied, among other jewellery, the diamond-studded bracelet worn by British actress Tilda Swinton (pictured right), who had just accepted the Oscar for Best Supporting Actress at the Academy Awards ceremony in the US at the time.

An Edina man is hoping to recover some of the $150,000 worth of jewelry stolen from his home late last month.

Most of the 64 pieces taken are family heirlooms made of gold rubies and diamonds. The victim is so concerned for his safety he asked not to be identified.

He said it is not the monetary loss that has upset him, "it's the emotional value that is really the most painful."

The jewelry had been passed down for generations. Many pieces are antiques from the victims native India.

Normally he and his wife kept everything in a safe but she had been wearing the jewelry through the holidays and had not yet locked the pieces away.

Edina police said they are not sure if the burglars came through the northwest Edina neighborhood and randomly picked that home or if they knew that the jewelry was there and targeted those vicitms.

The burglar broke through the front door locks and through a deadbolt.

It was mid-morning -- no one was home -- and as in many cases these days the burglars left no fingerprints.

Chief Mike Satari of the Edina Police calls it the CSI factor.

He said, "criminals watch it too they know it very well -- fingerprints. They are going to wear gloves."

Police have a system to track stolen goods at local Pawn shops but so far nothing has turned up leading police to think this may be a professional operation and the pieces may already be out of state.

Edina police are trying to determine if this case may be linked to at least one jewelry burglary in Woodbury, Minn.

The Edina Crime Prevention Fund is providing a $3,000 reward in this case.


War hero wants his medals back

A WAR veteran has been left devastated by the theft of his treasured service medals.

Frank Gray, 83, is appealing for the return of the rare minesweeping 1945-51, issue of King George VI medal, which was stolen from his home in Peggotty Close, Higham.

The pensioner discovered he had been burgled when he returned home from shopping to find his cupboards open and a jewellery box emptied.

Two other service medals, a 1939-45 Star and Atlantic Star, had been taken along with his father's pocket watch and Danish Kronas worth £130, which he had put aside for his grandson's forthcoming wedding in Denmark.

Mr Gray, who served in the Navy between 1942 and 1946, is desperate to have his sentimental belongings returned.

He said: " I am very upset that they have taken things precious to me. I would be pleased to have them back again because of my memories of wartime service in the Navy.

"My father was given the watch after 50 years of service at a cement works. It can't be worth much as it was engraved for him. I was going to pass it on to my son along with the medals."

Frank believes around 70,000 men were given the minesweeping medal for their services during the Second World War.

Service was incredibly dangerous and Mr Gray witnessed some horrors.

He said: "I was 18 when I enlisted and we were responsible for disposing of magnetic and acoustic mines. It became a way of life but you always hoped that the mines didn't come into contact with your ship. It happened to a ship next to us. One minute it was there and the next it wasn't."

It is thought by Kent Police that the intruders got in by reaching through the letter box.

Frank has now taken precautionary measures to ensure he is not victimised again.

He added: "It makes you feel very vulnerable. My things are probably long gone but I have had all sorts done to protect my home and make sure it doesn't happen again."

Police in north Kent are investigating the incident which happened between 9am-11.15am on Friday, February 1.

Any glamour attached to art and antiques theft is dispelled by this despicable act.
Posted by Art Hostage at 1:40 pm