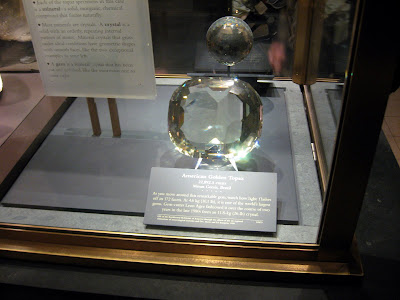 In St Tropez, police have launched an investigation, after the world's biggest topaz was stolen from an exhibition.

The jewel, worth 250,000 euros and designed by the Cubist artist, Georges Braque, was taken from a display at the Métamorphose show at the weekend.

It took one and a half hours before it was realised the 18 by 15 centimetre topaz was missing. It is so distinctive that it would have to be cut into several pieces before it could be re-sold.

In St Tropez, another jewellery robbery has taken place, 3 days after the world's largest topaz was stolen from a display at an exhibition. A Swiss couple's villa was burgled during their absence yesterday, with thieves getting away with around 1.5 million euros-worth of jewels.

Remember the French Art thieves who recently got busted with those stolen paintings ?

French art thief gets 62 months in prison
A French art thief who lived quietly in a Cooper City neighborhood and admitted stealing and trying to sell valuable Claude Monet and other paintings will serve more than five years in U.S. prison.

Ternus has multiple convictions for felonies in France, but he lied about them on his visa application when he flew into Miami on July 5, 2007.

One month later, on Aug. 5, five armed, masked thieves stormed the Museé des Beaux-Arts in Nice, France. In minutes, the thieves made off with four paintings valued at more than $6 million in front of shocked museum staff.

With the paintings in hand, the thieves needed a buyer. That's where Ternus came in. According to court documents, Ternus' role was to set the thieves up with wealthy buyers. He was not involved in the actual heist, prosecutors said.

Ternus approached two undercover FBI agents on Oct. 8, 2007, and told them that he could sell them the paintings. They met with him again repeatedly over the next few weeks, in hotel suites and on yachts in Europe and South Florida.

Court documents reveal that the thieves were getting anxious to be paid. '[Ternus'] associates are calling him all the time, asking if he has a buyer yet for the Nice paintings.'' They agreed on a $100,000 fee to pay for Ternus' team's expenses, like flights and house rentals.

Ternus also told the agents that he could sell kilos of cocaine in France, Italy and Spain. The plea deal doesn't say whether the agents negotiated any drug deals with Ternus, who was not charged with any drug-related offenses.

In January 2008, the agents and Ternus flew to Barcelona to meet with the thieves and agreed on a price: $3 million euros, roughly $4.7 million.

The money would be turned over to Ternus in Miami, and the paintings given to the agent's ''representatives'' in France.

But there was a problem. The skittish art thieves only agreed to sell the two Brueghels at first, holding onto the Monet and the Sisley as leverage in case anyone was arrested after the sale.

They told the undercover agents that they would hold the canvases hostage and threaten to rip them up if the police arrested anyone.

It took several more months of trans-Atlantic negotiation and meetings to get the thieves to agree to sell all four paintings in a single deal. The agents agreed to exchange both the money and the artwork in France.

On April 18, 2008, two FBI agents, two of the thieves and Ternus all met on a boat docked in Broward County to hammer out the final details of the sale. When the meeting ended, the criminals and the undercover agents hoisted glasses and they ``all toasted for good luck, `` according to court documents.

But Ternus' 10 months of planning collapsed on June 4, 2008, the date of the sale. Instead of collecting almost $5 million, Ternus was arrested at his Cooper City home.
Art Hostage comments:
Well, word is this gang have staged these thefts to use as bargaining counters for a lesser sentence on the original art theft in France they are currently indicted on. Lesser time means the Topaz will be returned.
However, Bernard Ternus could beat them all to it by making his own deal in Miami, where Ternus is serving 62 months.
As the U.S. govt, FBI Art Crime Team solved the original French art theft, then it is right they approach Bernard Ternus with view to recovering the stolen Topaz etc.
Furthermore, if Bernard Ternus can help recover the stolen Topaz etc then perhaps he should get time off his 62 months sentence as reward.
Posted by Art Hostage at 3:50 pm