Unfinished Bacon expected to Sell for between £4-7 million !! Update !! 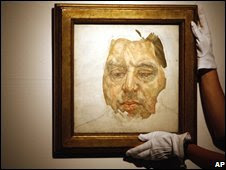 Freud painting of Bacon for sale

A rare portrait of the artist Francis Bacon, painted by his contemporary Lucien Freud, is to be sold at auction at Christie's in London.

The unfinished picture, which is expected to fetch between £4m and £7m, sprang from the friendship between two of the 20th century's greatest talents.

The only completed painting of Bacon by Freud was stolen from a gallery in Berlin in 1988 and never recovered.

The BBC's Lawrence Pollard said Bacon was already regarded as a master painter before his death and most critics would rank him as one of the most important artists of the late 20th Century.

Those same critics would also agree that Freud is the pre-eminent living painter of our age, our correspondent added.

The two men met shortly after the Second World War and were both figurative painters.

The auction is to be held at a Post War and Contemporary Art Evening Sale on Sunday.
Art Hostage comments:
-
Alternatively, this version of "Unfinished Bacon" by Tracey Emin, from her "Emperors Clothes" range is available.
- 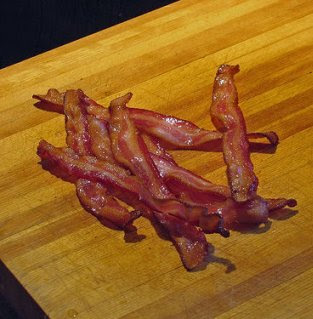 Portrait of Francis Bacon by Freud sells for £5.4 million

An unfinished portrait of Francis Bacon by Lucian Freud, one of only two he ever painted of his friend and the only one whose whereabouts is known, sold for £5.4 million today, auction house Christie's said.

The 85-year-old Freud's only other picture of his fellow artist Bacon, painted in 1952, was stolen from a show in Berlin in 1988 and has never been seen since in public.

The two men were firm friends. While Freud, who is regarded as one of the world's greatest living artists, frequently sat for Bacon the latter, who died in 1992, returned the favour for only two portraits.

The unfinished portrait dates from 1956/7 and as with the missing painting it shows Bacon with downcast eyes.

"The present work offers a fascinating snapshot into the working methods of the artist at a critical point of his artistic development," said Christie's in a statement.

"Freud had begun to work in a more expansive way using thicker brushstrokes, liberating the paint and creating a more worked complexion, more seasoned and full of life."

In May Bacon's Triptych, 1976 sold for $86 million setting a record for postwar art, while the day before that sale Freud's Benefits Supervisor Sleeping established a new mark for a living artist when it sold for $33.64 million.

The Tracey Emin version of "Unfinished Bacon" from her Emperor's Clothes range also sold for a hammer price of £4.50 plus 20% commission !!!
Posted by Art Hostage at 3:19 pm