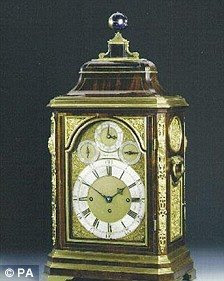 A 61-YEAR-OLD man is expected to appear at Downpatrick's Magistrate's Court next month charged in connection with the theft of antiques worth hundreds of thousands of pounds.

Police arrested the man on Thursday following the search of a house in the Saul Road area of Downpatrick on Wednesday, October 22.

Seven antique clocks - worth several hundred thousands pounds - were seized at the premises during the operation.

A man in his 40s was also arrested on Thursday but has since been released pending further inquiries.

The 61-year-old man is due to appear at court charged with receiving stolen goods on November 20.
Art Hostage Comments:
All will be revealed about this operation and the whole story of how this came about, since August release !!!!!
Posted by Art Hostage at 1:43 am