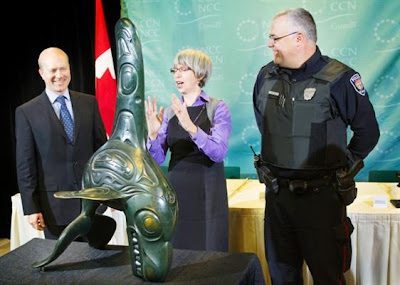 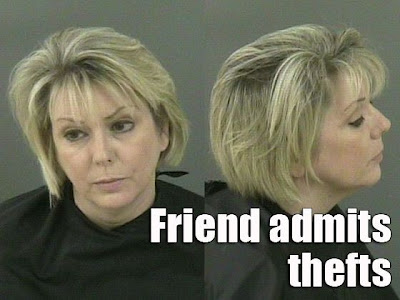 OTTAWA — Andrew Gibbs was skeptical when he received a mysterious phone call this past September about “a big metal thing” in the shape of a killer whale.

The art appraiser with Heffel Fine Auction House responds to daily inquiries about invaluable pieces of art, some of which turn out to be fakes.

But weeks later, when he opened an envelope that had been slipped under his door and found an unmarked photograph of the bronze sculpture, he knew it was the work of acclaimed Haida artist Bill Reid.

What he didn’t know was that the piece had been stolen more than 16 years ago from a park along the Rideau Canal.

“As there were no contact details on the envelope, I was sort of at a bit of a loss. I didn’t know what to do because I knew this piece was important. I knew that it would have to come back to us. With the likelihood that it could have been stolen, there was also the possibility that it could be melted down,” Gibbs said.

A call to Reid’s widow confirmed to Gibbs that Edition No. 6 of nine killer whale sculptures had indeed been stolen.

The National Capital Commission bought the sculpture for $48,000 in 1985. It grew in value in concert with Reid’s prominence and was appraised at $150,000 when it disappeared from its home in the Fourth Avenue pond in 1995.

The sculpture, which stands 1.1 metres high and 0.5 metres wide, had been stolen once before in 1987. It was found in some bushes a few blocks from the pond between Queen Elizabeth Drive and the Rideau Canal. The 113-kilogram sculpture was moved to the centre of the pond and affixed to a foundation with two-metre-long bolts.

There were no witnesses and no suspects when it was taken for the second time. The bolts had been cut.

Ottawa police took the cold case off the shelf in December 2011 thanks to the tip from Gibbs. The sculpture was recovered and returned to the NCC that month.

“You can imagine that the disappearance of such a work from an accomplished artist like Bill Reid was a major loss for the capital and for Canadians. We are thoroughly delighted and so thankful that it has returned after such a long period,” said Sylvie Tilden, who manages public art for the NCC.

Once the sculpture is appraised, it will return to the public realm — joining dozens of NCC pieces of outdoor art in the capital region.

“It livens our public spaces, it contributes toward generating pride in the artistic talent and creativity of our country, and it is an important component of our cultural tourism,” Tilden said. “Art is there to engage, to delight, to surprise and to inspire thought and debate.”

The killer whale will not go back to the pond but it will be placed in a public area — yet to be announced — that has a “24-hour presence,” Tilden said.

Meanwhile, details of where the killer whale has been for the past 16 years are scarce.

Ottawa police Const. Marc Soucy said there’s no indication that the person who was in possession of the sculpture knew that it was stolen. He has not been charged. Soucy said the investigation has “stalled” and asked anyone with information about the statue dating back to the day it was stolen to come forward.

“This is a great example of community policing,” Soucy said. “This is a great piece of art that was located because of public information and we really appreciate that. The investigation has gone cold a bit. It has stalled, so we are appealing to the public if they have information.”

A resident of the 100 block of North Washington Street, Delaware, Ohio reported antique jewelry was stolen by an "antique dealer" who came to the victim's home to survey antiques Feb. 20, reports said.

VERO BEACH, Fla. -- A Vero Beach woman has been arrested on a charges of stealing $80,000 worth of property from a friend who was also her neighbor, then pawning items for pennies on the dollar in cash.

Indian River County Sheriff's Office reports deputies say Jeanne K. Buday, 50, of 7589 15th St., would go into her neighbor's home while she was out of town and steal jewelry, antiques and artwork. Deputies say Buday then pawned several of the items at a trio of pawn shops for about $4,800, saying she used the money to pay off her car and some credit card bills.

The victim estimated a loss of $80,000 in the arrest affidavit.

A friend of Buday's told police that she saw a silver platter and china listed in a yard sale Buday was holding.

The victim's housekeeper informed her in the first week of her seasonal absence in May that someone had defecated in one of the bathrooms and had been sitting on the couch. When the victim's nephew stayed at her home in September, he reported that the home appeared to be unkempt as if someone was hanging out in the home. The victim told police that only the housekeeper and Buday had keys to the home.

According to the arrest affidavit, a teary Buday confessed in person to the victim on Feb. 17 to stealing only some of the missing items. She told the victim that her doctor had changed her medication and she needed cash.

Buday was arrested on Tuesday after she was recorded in a call to the victim again admitting stealing items from her friend's home. She is held in the Indian River County jail on a $25,000 bond, charged with grand theft, giving false information to a pawn broker and dealing in stolen property.

The police arrested the burglars who love art – 20 paintings stolen

The police from Zagreb arrested the three men because they are under the suspicion of two burglaries – the report says.

The suspects are a 33-year-old, a 30-year-old and a 20-year-old. They allegedly broke into the art studio in Draskoviceva street owned by a 55-year-old and took 17 paintings sometime between the 21st January and 6th February 2012.

The burglary was repeated in the period from 21st of January to 6th February. Then they broke into the attic in Krijesnice street which belongs to a 45-year-old and they took three paintings.

After the enquiry has been finished, they have been brought to the prison supervisor, the police reported.

TWO antiques have been stolen from a museum cabinet in broad daylight, it emerged yesterday.

The two valuable Buddha statues were stolen on Tuesday morning by a gang wielding a baseball bat.

Three men smashed the glass cabinet containing the figurines at the Ulster Folk Museum at Cultra outside Belfast in the daytime raid.

It is understood they could not be identified because they were wearing hoodies.

A spokesperson for the museum confirmed that two small statues depicting the eastern god Buddha were stolen during the robbery.

She said one of the statues was wooden and the other gilded metal.

Both are believed to date from the mid to late 19th century. She did not say how much they are estimated to be worth.

The gang drove up to the museum at Cultra, Co Down in a black Audi car just before midday on Tuesday and carried out the robbery.

No one was injured in the incident.

The men made off in the direction of Belfast.

Detectives said they were releasing images of the stolen artefacts in a bid to prevent the thieves offering them for sale and to ensure their safe return to the museum.

One of the men involved is described as wearing blue jeans, black hat, dark navy jacket and black trainers.

The second was wearing a dark jacket, cream tracksuit bottoms with a blue stripe down the leg, light coloured trainers and a black hat.

The third man was described as wearing a dark navy jacket with a white line across the chest, black bottoms, grey trainers and a green beanie style hat with a green and blue stripe.

Chair of the Department of Culture, Arts and Leisure committee Michelle McIlveen described the incident as “a terrible act of theft”.

The DUP MLA said: “The blatant nature of the theft raises serious questions about the security at the Ulster Museum.

“Whilst I was horrified at the news, I was also shocked that these precious aretifacts could be so easily removed by thieves.”