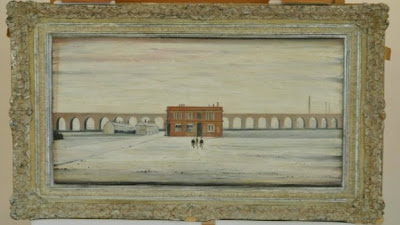 Three men are set to appear in court for sentencing today having pleaded guilty to handling a number of stolen art masterpieces.

Officers from the North West Regional Organised Crime Unit (Titan), alongside officers from Merseyside Police and GMP, ran an investigation into the theft of LS Lowry paintings after a robbery at the home of an art dealer in Cheadle Hulme on May 3, 2007

The pair were subsequently charged with handling stolen goods following the recovery of seven paintings from the house.

A significant quantity of Class A and B drugs and some cash were also recovered from the property.

Gerard Starkey, aged 50, of Southport Road, Bootle was also charged with handling stolen goods after a number of paintings were also discovered at a unit on Northfield Road, Bootle.

All three pleaded guilty to the charges.

The sentencing at Liverpool Crown Court of three men over the theft of LS Lowry masterpieces valued at £1.7 million has been delayed.

A Newton hearing from one of the defendants took place yesterday which will continue into this morning.

Sentencing is expected to take place after that. The defendants are Malcolm Shield, 41; Kevin Marlow, 29; and Gerard Starkey, 50. The masterpieces were stolen in a robbery at the home of an art dealer in Stockport, in 2007.
Posted by Art Hostage at 2:03 pm