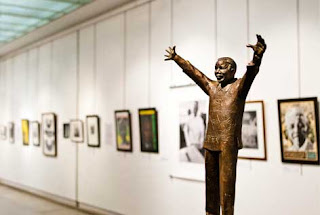 Pretoria -A prominent Pretoria artist is suspected to be behind the brazen robbery in which three men made off with paintings worth R17.5 million from the Pretoria Art Museum.
-
The artist allegedly commissioned the men to steal the masterpieces for him, the Pretoria News has been told.
-
On Monday, Crime Line received a tip-off regarding the robbery. The head of Crime Line, Yusuf Abramjee, said the information had been passed on to police to follow up.

Five paintings valued at about U.S. $2 million were stolen from the Pretoria Art Museum in Arcadia on Sunday morning, Gauteng police said.

Three men had paid an admission fee of R10 to enter the museum where they pretended to be viewing some of the artworks, Lt-Col Katlego Mogale said.

"Once inside they pointed a firearm at the person at the counter and demanded certain paintings," she said.

The robbers took five paintings and fled the scene in a silver Toyota Avanza.

Authorities said the robbers stole specific paintings, but were forced to leave behind a painting by well-known artist Irma Stern because it did not fit in their silver sedan car, AFP reports.
The gunmen escaped with another Stern painting, Fishing boats, South Africa's Times Live newspaper reports.
Other paintings stolen include Maggie Laubser's Cat and Petunias, JH Pierneef's Eland and Bird, Hugo Naude's Hottentot Chief and Gerard Sekoto's Street scene, it reports.

No arrests were made and a case of armed robbery had been opened.

Reacting to Sunday's brazen robbery, in which five paintings estimated at around R15 million were stolen, DA spokesman Johan Welmans blamed the municipality.

"I have alerted the Tshwane metro about the lack of commitment towards this institution for a long time. The impression I got is that the Pretoria Art Museum is simply not a priority for the ANC-led Tshwane metro," he said.

"The DA has been concerned about the management of the museum for a long time. The reported value of R15 million lost is relative if one considers that this fine art is irreplaceable," said Welmans.

However, Pieter de Necker, spokesman for Tshwane Mayor Kgosientso Ramokgopa, said the robbery was a wakeup call for museums across the country.

"It is unfortunate the CCTV cameras were not working this weekend. A fault was reported on Thursday and has been fixed today," said de Necker.

"Security at museums should be improved. This incident calls for extra measures to be implemented," he said.

De Necker said the security concerns were not confined to the DA but were shared amongst many people in South Africa.

"It [security] is a concern for many museums across the country. The criminals walked in like art lovers and robbed the museum at gunpoint," he said.

He said the municipality was providing counseling service for the "traumatised" personnel who endured the robbery.

The Beeld newspaper reported on Monday that the five paintings seized included an Irma Stern, worth R9 million, and a Gerard Sekoto, worth R7 million.

A sixth painting, Irma Stern's "Two Malay Musicians", valued at R12 million, was dumped on the pavement outside the museum after the robbery, apparently because the criminals were unable to fit it into their getaway car, a silver Toyota Avanza.

According to museum staff, the thieves arrived with a "shopping list" of what they wanted, and demanded to be given specific paintings.

After holding staff member Daywood Khan at gunpoint, they took out their list, and demanded to know where the paintings were.

Museum curator Dirk Oegema said the robbery would be discussed at an urgent management meeting on Monday.

Art expert Stephen Welz said the theft was a tragedy, but that he was puzzled by it, as famous works of art were so well documented that it was nearly impossible to sell them, locally or abroad.