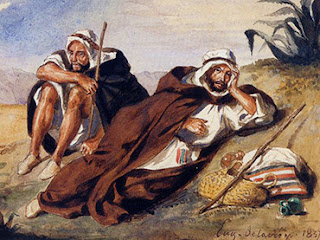 A painting by famed French artist Eugene Delacroix worth 600,000 euros ($780,000) was stolen Friday from an art gallery in central Paris, an informed source said..
The work entitled "The Arabs of Oran" was painted in 1833. It was on display in a gallery on the chic rue Saint-Honore which runs parallel to the Louvre museum.
A gallery worker discovered the theft in the afternoon.

Delacroix, who lived from 1798 to 1863, was the most important member of the French Romantic movement.
Posted by Art Hostage at 5:31 pm