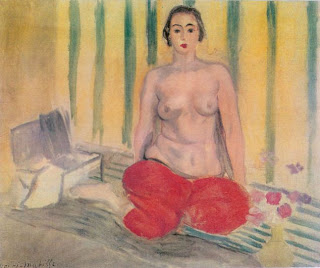 Two people have pleaded guilty to trying to sell a $3m (£1.8m) Henri Matisse painting stolen from a museum in Venezuela nearly 10 years ago.
The pair were caught in an FBI undercover operation at a Miami hotel in July.
Pedro Antonio Marcuello Guzman, 46, faces 10 years in jail for conspiracy to transport and sell stolen property, while Maria Martha Elisa Ornelas Lazo, 50, faces five years.
The pair will be sentenced in January.
The 1925 painting Odalisque in Red Pants had been hanging in the Caracas Museum of Contemporary Art.
Replaced with forgery The painting depicts a bare-chested woman sitting cross-legged on the floor wearing a pair of scarlet trousers.
In 2003 the museum discovered the original artwork had been replaced with a forgery after an art collector reported it was being offered for sale in New York.
A court heard Mr Guzman, from Miami, was negotiating the sale and transportation of the Matisse for approximately $740,000 (£458,000) from Mexico by Ms Ornelas Lazo.
The pair were arrested when the painting was handed over to undercover FBI agents posing as buyers in Miami.
The FBI's National Stolen Art File database lists five other missing Matisse works, including a collection of 62 sketches.
His works were also among those stolen from a museum in Rotterdam in October. Thieves also stole paintings by Monet and Picasso.
Posted by Art Hostage at 10:01 am