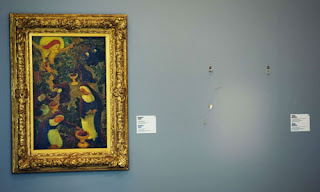 THE HAGUE, Netherlands —
Romanian authorities have arrested three suspects in last year's multimillion-dollar art heist from a Netherlands art gallery, Dutch police said Tuesday. But the paintings, by artists including Picasso, Matisse and Monet, have not been recovered.
The announcement marked the first breakthrough for police since thieves broke open an emergency exit and swiped the seven pieces on Oct. 16 in a late night raid at the Kunsthal gallery in Rotterdam.
It was the biggest art theft in more than a decade in the Netherlands. The stolen works have an estimated value of tens of millions of dollars if they were sold at auction, but art experts said that would be impossible following the theft.
"Three people have been arrested, but unfortunately we have not got back the paintings," Rotterdam Police spokeswoman Yvette van den Heerik told The Associated Press.
Police later said in a statement that the suspects were arrested as part of an ongoing Romanian investigation and not at the request of Dutch authorities.
Kunsthal spokeswoman Mariette Maaskant said gallery staff members are not yet breathing a sigh of relief. "There is no painting found yet," she said. "For us, that is the most important thing."
Romanian police spokeswoman Raluca Seucan declined to provide details of the case to the AP. Romanian news agency Mediafax reported that three Romanian suspects had been arrested Monday evening following a ruling from a Bucharest court. It gave no further details.
The heist at one of Rotterdam's landmark buildings, designed by local architect Rem Koolhaas, was low-tech but effective.
Two thieves forced their way into the gallery through a rear emergency door and snatched the paintings. Security cameras showed the thieves breaking in and fleeing within two minutes. They were gone by the time police, alerted by an alarm, arrived less than five minutes after the break-in.
The following morning, only white spaces on the wall and broken hanging wires were left.
The stolen paintings came from the private Triton Foundation, a collection of avant-garde art put together by multimillionaire Willem Cordia, an investor and businessman, and his wife, Marijke Cordia-Van der Laan. Willem Cordia died in 2011.
The stolen paintings were: Pablo Picasso's 1971 "Harlequin Head"; Claude Monet's 1901 "Waterloo Bridge, London" and "Charing Cross Bridge, London"; Henri Matisse's 1919 "Reading Girl in White and Yellow"; Paul Gauguin's 1898 "Girl in Front of Open Window"; Meyer de Haan's "Self-Portrait," around 1890, and Lucian Freud's 2002 work "Woman with Eyes Closed."

Bucharest - Three Romanians allegedly involved in a spectacular theft from a Dutch museum last year were caught while negotiating the sale of the stolen masterpieces, a Romanian newspaper reported Wednesday.

Romanian police and the prosecutor's office dealing with terrorism and organised crime (DIICOT) declined to comment on the report in Evenimentul Zilei.

A Bucharest court announced on Wednesday that the three suspects were indicted for “setting up a criminal ring and complicity to aggravated theft”.
They have been jailed for 29 days, the court confirmed.

“According to prosecutors, the indictees associated themselves with other people with the aim of committing criminal offences in 2012,” the court said in a statement sent to AFP.

They allegedly “helped the members of the criminal group to steal seven masterpieces, including Monets, a Matisse and a Gauguin, from the Kunsthal Rotterdam Museum on the night of October 15 to October 16, 2012”, the court added.

According to the court statement, the three Romanians, identified only with their initials ÄDR, BMA and DEÄ caused a prejudice for two of the seven stolen paintings, a Matisse and a Gauguin estimated at
18 million euros to the Triton Foundation, the owner of the stolen paintings.

When the theft took place, experts said the seven paintings, that also include a Picasso, "Tete d'Arlequin", were worth together between 50 million and 200 million euros ($66 million and $266 million) on the open market.

(Worth noting, the Picasso "Tete d'Arlequin" was bought by the Triton Foundation at Sotheby's New York in May 2007 for $15.5 million)

The Dutch police said on Wednesday in a Twitter message that “two investigators and a colleague from the public prosecution service were headed for Romania for talks with the judiciary regarding the arrests/possible link with Kunsthal.”

Dutch police had said Tuesday that no painting had been recovered.

According to judicial sources quoted by Evenimentul Zilei, the three suspects come from the Tulcea region in eastern Romania and had been under investigation for violent offences in the past.

Romanian investigators have not found seven masterpieces that were stolen from a Dutch museum last year, despite extensive searches at several locations after the arrest of three suspected thieves, a source close to the probe said Thursday.
Three Romanians allegedly involved in the spectacular theft of the paintings, including works by Picasso, Monet, Matisse and Gauguin, from the Kunsthal in Rotterdam in October were arrested overnight Monday in Bucharest.
"During the investigation we have searched several locations," the source said.
"But police are still looking for the paintings, which may have transited through Romania," the source added.
The three men had been living in the Netherlands for several years and were known as underworld members.
"There are indications that several other persons were involved in the theft," Romania's police chief Petre Toba said Thursday.
A day earlier, Romanian daily Evenimentul Zilei reported the suspects were caught while trying to sell the art works.
The Bucharest court that charged the suspects said they were accused of "setting up a criminal ring and complicity to aggravated theft," and remanded for 29 days.
Two Dutch investigators and a prosecutor arrived in Romania on Thursday for talks with the judiciary regarding the three arrests.

Dutch detectives and a prosecutor will travel to Romania to investigate the possible involvement of three men in a multimillion-dollar art heist in the Netherlands, a police spokesman said Wednesday.

The Dutch team will travel to Bucharest in coming days to share with Romanian authorities details of their investigation into the Oct. 16 theft from Rotterdam's Kunsthal gallery of seven extremely valuable paintings by artists including Picasso, Monet and Matisse, said Roland Ekkers of Rotterdam Police.

Romanian police arrested the suspects Monday night "in another art-related investigation in Romania, but there are indications they also have something to do with the art heist in Rotterdam," Ekkers told The Associated Press.

The arrests marked the first breakthrough for police since the late-night raid at the Kunsthal, the biggest art theft in more than a decade in the Netherlands.

The three suspects may have been part of an international ring, Romanian authorities suggested Wednesday.

Lucia Zaharia, spokeswoman for Bucharest's Sector 5 court, told the AP that the men were ordered held for 29 days pending an investigation into whether they were involved in the heist.

''They were part of a group, according to documents," she said in a telephone interview. ''We can only investigate people who are in Romania," she added, a hint that the gang had foreign members.

Ekkers said reports that some of the paintings were recovered were wrong.
Romanian police "checked, double checked and checked again and it is not true," he said.

The head of Interpol says he believes police will retrieve valuable paintings that were stolen from a museum in the Netherlands last year, including works by Picasso, Monet and Matisse.
Dutch detectives and a prosecutor are currently in Romania to investigate the possible involvement of three men_ arrested Monday in Romania_ in the Oct. 16 theft from Rotterdam's Kunsthal gallery of seven extremely valuable paintings.
Interpol Secretary General Ronald K. Noble said Thursday he is confident the works will be recovered.
Romanian police and Noble declined to provide more information citing the sensitivity of the case.
`'The people involved are probably watching " this press conference, Noble said.

What authorities fail to say is this is linked to the Europe wide raids against the Rathkeale Rovers and intelligence gleaned from those raids led to these arrests. However, the stolen art remains outstanding and those who have knowledge of their whereabouts realize there are no rewards, no fee's and anyone attempting to receive any payments for recovery of the stolen art will be arrested and face indictment.
Furthermore, it is widely known and universally agreed that anyone who says they represent the Kunsthal Gallery, Triton Foundation or insurers are in fact undercover Police.

This is no big secret, previous undercover sting operations have shown this to be true, over and over again.

A paradox, when art & antiques goes missing, the Insurers and Art Loss Adjusters become Pathological Liars, even more than usual.

How can you tell when an Insurer or Art Loss Adjuster is lying, their lips move !!
Posted by Art Hostage at 7:23 pm