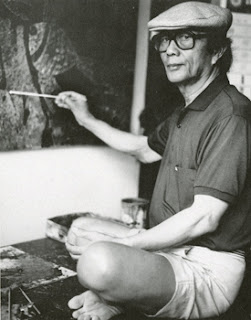 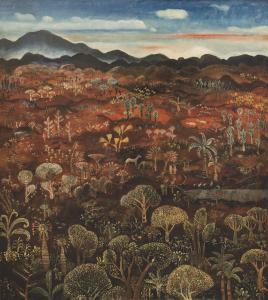 The art thieves assaulted the museum’s security staff, locking them in a room before they stole some 140 paintings from the gallery floor and the building’s storage room, museum director Fajar Purnomo Sidi said.

“These people know art... ” Fajar said of the robbers. “It happened at two or three o’clock in the morning. They transported the paintings by truck. Right now we have no idea where the collection might be.”

Museum staff was still checking on the total number of missing paintings on Sunday.

“This figure still need to be cross-checked. But for the time being, based on our initial assessment, there are 140 collections which have been stolen,” Fajar said.

Widayat has been described as “one of the most influential Javanese painters of the 20th Century.” He was known for reinterpreting traditional Javanese legends through a modern, abstract lens.

Fajar said the museum staff didn’t want to estimate the value of the missing paintings.

“We can’t say the value of the [paintings] stolen” he said. “We don’t want the paintings to be traded for money, we want the pieces [back].”

Museum caretaker Iskandar said six people had visited him on Thursday and one of them, who claimed to be a shareholder of the museum, had asked him for the key.

"Since he said he was a shareholder of the museum, I handed him the key. He told me to stay in my house," Iskandar said Saturday evening as quoted by tempo.co.

"I was informed by the guards that 140 paintings had gone missing at 3 a.m.," Iskandar said.

Museum director Fajar Purnomo Sidi said he had been questioned by the police regarding the incident. He suspected the thief was one of the late artist Widayat’s 11 children.

In mid-2010, one of Widayat's sons also reported the suspected theft of his late father's paintings after discovering three paintings -- Sakura, Bis Kota and Andong -- at an auction house.

The H. Widayat Museum, which houses about 1,000 of Widayat's paintings, was officially opened to the public in April 1994 by former education minister Wardiman Djojonegoro.(iwa)
Posted by Art Hostage at 5:13 pm