Art Crime Gang One Step Ahead of Bungling Police !! 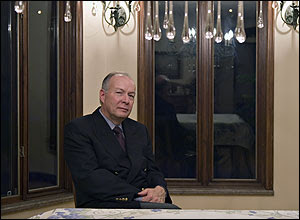 Veteran lawyer Michael Morse, above, was accused of being a mastermind of a criminal gang that targeted antique stores and auction houses. All charges against him were dropped last week in court.


Five of those who faced charges in connection with Project Antique

Darryl Vincent, 68, has a criminal record that goes back 45 years with the vast majority of his run-ins with police involving the theft of high-end goods. He also has been convicted of similar crimes in several other parts of the world.

Penny Sherman (formerly Penny Yankula), who turns 65 next month, is no stranger to the criminal justice system. She was once charged with trafficking heroin and possessing a stolen mink coat.

Ira Hussey, 48, was one of the accused men in the so-called Askov case, in which charges were thrown out by the Supreme Court of Canada because they took too long to get to trial. In 1989, he was among 14 men charged after a police investigation into the $2 million theft of transport trailers packed with televisions, stereos and other pricey items.

Michael Morse, 59, is a defence lawyer who has practised for 30 years, including as a prosecutor. He is a married father of two boys, and collects antiques as a hobby. Police claimed he was the mastermind of a high-end antiques theft ring, but a judge acquitted him of all charges last Friday.

Raymond Hobin, 49, is an international art thief with multiple criminal convictions and several stints in jail. He was the Crown's star witness against Morse and two co-accused in the alleged antiques theft ring. A judge called him a charming con artist whose testimony was highly suspect. Morse called him the Prince of Darkness.
Posted by Art Hostage at 3:21 pm