Revealed: the unseen Goya painting of the boy who halted the Spanish Inquisition 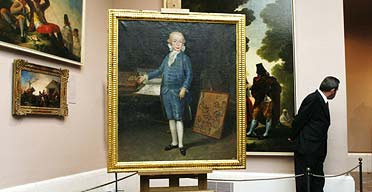 The Goya masterpiece of the six-year-old Infante Don Luis Maria is on show in Madrid's Prado museum after centuries in private hands. Photograph: Susana Vera/Reuters


Revealed: the unseen Goya painting of the boy who halted the Spanish Inquisition


It is the portrait that everyone knew existed but few have been fortunate enough to see in the two centuries or so since it was painted.

Yesterday that painting of a cherubic-looking six-year-old member of the Spanish royal family, the Infante Don Luis Maria, was displayed to the world for the first time since Francisco de Goya put paintbrush to canvas in 1783.

But just as intriguing as the painting is the subject himself - an apparently studious little boy who would go on to become a cardinal at the age of 23 and who would put an end to that most infamous institution, the Spanish Inquisition.

Only a handful of experts and members of a family of Spanish grandees who descend from Luis's heirs had set eyes on the portrait. "It has never been loaned to any exhibition and has remained in the family's hands ever since," said a spokesman for Spain's Foundation Plaza, which has bought the picture for €10m (£6.7m).

The canvas, only slightly grubby after two centuries of hanging on the walls of the private palaces of a series of dukes, was unveiled yesterday by curators at Madrid's Prado museum.

"It is one of the masterpieces of the period," said the Prado's head of conservation, Gabriele Finaldi. "There is a certain amount of superficial dirt. Otherwise it is in an almost virgin state."

A modest clean-up, the fixing of a few scratches and replacement of a yellowing varnish would reveal the full depth and wealth of colours employed, he added.

The "new" Goya features a blond-haired boy in blue breeches and tailcoat, standing over a map of the world. He holds a piece of a puzzle map of Spain in one hand and a compass in the other.

His full name is Prince Don Luis Maria de Borbon y Vallabriga and he was a nephew of Spain's King Carlos III.

For Goya, still in his 30s, this was the first portrait of what would go on to become one of his staple subjects - the children of Spanish royalty. A second portrait, of Luis's sister Maria Teresa, was painted at the same time and now hangs in the National Gallery in Washington.

The encounter between the boy who grew up to be a cardinal and the painter who became a legend took place in 1783.

The young Goya travelled to the family estate in Avila province, where Luis's father had been sent after being expelled from the court by his brother, the king.

He spent time living with the family, as Luis's father became his first major royal patron and introduced him to the rest of Spain's nobility. Goya would go on to become court painter to several Spanish kings before turning deaf and producing, with his later paintings and etchings such as Los Caprichos, some of the most intense and troubling pictures of all time.

With his mock-adult clothes topped off by an enormous white bow in his hair, surrounded by maps, the young Luis is already being asked to show off the progressive education which was meant to prepare him for future responsibility.

Luis became the Bishop of Seville just sixteen years later, at the age of 22. He was appointed cardinal just a year after that.

Abolishing the Spanish Inquisition was just one of the achievements of a man who became closely associated with the first political movement in the world to go by the name "liberal".

He presided over a regency, backed by a liberal constitution, that fought off the invading forces of Napoleon Bonaparte. The reactionary nephew he helped place on the throne, King Fernando VII, so disapproved of his views, however, that he confiscated his dioceses and his lands.

Although the Prado museum officially said yesterday the previous owners had requested anonymity, the Spanish press named them as the Dukes of Sueca - a family of Spanish grandees who have been selling off inherited wealth for decades.

The painting has been given to the Prado for conservation work but it will soon hang in the city museum in Zaragoza, central Spain - close to the town of Goya's birth, Fuendetodos. A new museum to house Goya paintings is be built in the city as part of an international Expo that it hosts in 2008.
Backstory

Francisco de Goya was a Spanish court painter who turned gradually from portraits of royalty and nobles to subversive depictions of everything from war and the inquisition to monsters and priests. Born in 1746, he slowly gained fame as a portrait artist, thanks to a series of Spanish monarchs who became patrons. He went deaf in 1792, apparently due to the poisons contained in his paints. Obsessed by the French Revolution and philosophy, he turned out a a series of troubling aquatint etchings known as Los Caprichos

He is credited with being one of the first artists to describe the full horrors of warfare. He continues to provoke passions today, with British artists Jake and Dinos Chapman shocking the art world in 2003 by defacing a series of his Disasters of War prints.
Posted by Art Hostage at 3:57 pm