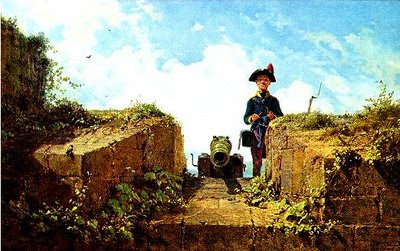 Mannheim, Germany (dpa) - A stolen painting estimated to be worth half a million euros (650,000 dollars) has been recovered by German police, nine months after art thieves took it from the Mannheim Art Gallery in the southwest of the country.


The picture, Peacetime, by Carl Spitzweg (1808-1885), depicts a 19th-century soldier guarding a fort that is being overwhelmed by vines.

Police said Thursday the painting was recovered the previous evening near the city where it was stolen late on March 18 and one person was arrested. Police said they would give more details later.

The 25-by-49-centimetre oil painting, which had been in the gallery for more than 100 years, is typical of the Biedermeier period of German art.

The gallery admitted security had been lax while workers were preparing a new exhibition in a closed part of the gallery where the painting was hanging.
Posted by Art Hostage at 3:11 pm