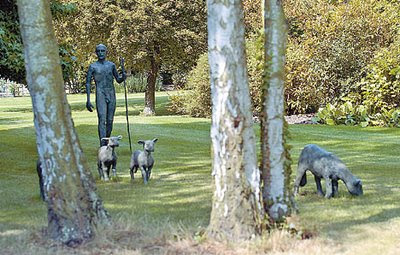 Sculptures stolen from the garden of Lord and Lady Archer have been recovered by police.

The two life-sized pieces, including one of a naked shepherd, were stolen on February 6 while Mary Archer, 61, was in the house in Grantchester, near Cambridge.

A police spokeswoman said the sculptures were found yesterday evening three-quarters of a mile down a muddy track in Black Pit Drove, Willingham, Cambridgeshire.

She said no arrests had been made but investigations were continuing.

The spokeswoman said: "The sculptures had been concealed, and due to the size and weight of the sculptures and the remote location where they were found, specialist recovery and lifting equipment was used to recover the statues.

"The statues and material used to conceal them are now being kept in a secure site and will today undergo forensic examination."

The first piece, titled Shepherd and Sheep, is by Christopher Marvell and was installed in 1998.

The second, titled Girl Doing a Handstand, is by family friend the late Sydney Harpley and was commissioned in 1986.

Shepherd and Sheep attracted notoriety two years ago when Margaret Crick's autobiography of Lady Archer revealed she had asked Mr Marvell to reduce the size of the shepherd's penis.

Lord and Lady Archer offered a reward of £1,000 for the return of the sculptures.

Lord and Lady Archer said today: "We are absolutely delighted that our stolen works of art have been safely recovered."

However, if you have paid a reward be warned, the Police will prosecute you under the 2002 Proceeds of Crime act so better keep quiet.

Furthermore, if you are considering paying a reward you may well want to think of the consequences of the handler going to the media at some later stage and this could come back to haunt you.

Well done for getting you bronzes back. 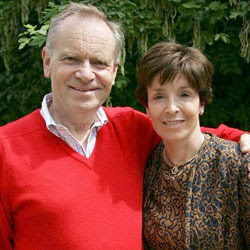