A Sheep Without Sheep's Clothing !! 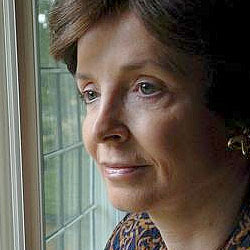 VALUABLE bronze sculptures have been stolen from the front garden of Lord and Lady Archer's home.

Thieves cut through a neighbouring wire fence and backed a van into the grounds of the Old Vicarage in Grantchester on Tuesday evening.

When she woke on Wednesday morning she discovered the Shepherd and Sheep statues by Fulbourn sculptor Christopher Marvell were missing, along with Handstand by the late Sydney Harpley.

Lady Archer said: "They are both original works of art of considerable real value, and sentimental value.

"It is very upsetting. They both have great sentimental value, and Sydney Harpley, who died in 1992, was a personal friend."

Shepherd and Sheep consists of five statues - a shepherd with four sheep. It was bought by the couple in 1998.

Handstand, which is a statue of a girl doing a handstand, has been in their garden since 1986. 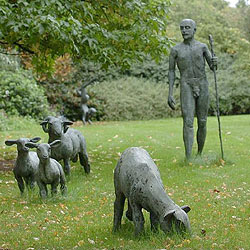 Lady Archer believes two or three men would have been needed to lift the heavy sculptures.

CCTV cameras at The Orchard Tea Gardens in Mill Way, which is next to the Old Vicarage, captured two men backing up a white van to the wire fence, and stealing the sculptures between 6.15pm and 7.15pm.

Det Sgt Dean Wiffin, investigating, said: "We would like to speak to anyone who saw any suspicious activity in the area of Mill Way last night. These sculptures would have needed a large vehicle to move them and I would like to hear from anyone who remembers seeing a van in the area."

Police are investigating the possibility the incident may be linked to a spate of metal thefts, with thieves targeting sculptures, plumbing supplies, cables and lightning rods to sell on as scrap.

In June 2006 Margaret Thatcher was invited to the Old Vicarage to unveil a statue of Rupert Brooke, the First World War poet who immortalised the Old Vicarage in his poem of the same name, which contains the famous lines: "Stands the church clock at ten to three, And is there honey still for tea?"

Lady Archer is chairman of the Addenbrooke's NHS Trust, and her husband Jeffrey, the disgraced former MP who was jailed for perjury, is currently playing one of 12 jurors in a new BBC2 programme The Verdictwhich starts on Sunday, as well as giving away his own money to make "people's dreams come true" in ITV show Fortune: Million Pound Giveaway.

Anyone with information should call Cambridgeshire Constabulary on 0845 4564564 or Crimestoppers anonymously on 0800 555111.

He has written about crime. He has been in jail himself. But today Jeffrey Archer found himself the victim of crime after thieves stole a life-sized sculpture of a naked shepherd and four sheep from the garden of his home outside Cambridge.

The sculpture, together with a bronze of a naked girl doing a handstand, were stolen from his Grantchester home on Tuesday night after thieves cut a hole in the garden fence.

Detectives fear that the pieces may already have been melted down for scrap to be sold abroad. 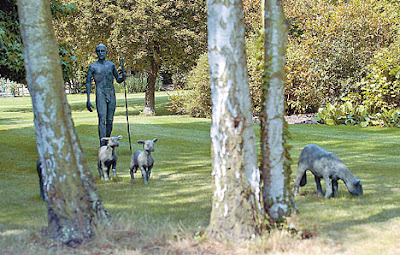 Lord Archer's wife Mary, who was in the house at the time, said they were going to offer a reward for information leading to the recovery of the pieces, which are thought to be worth tens of thousands of pounds.

"I am very angry, and very sad at the vandalism and possible destruction of lovely works of art," she said.

The thieves - two men in a van - were captured on the Archers' CCTV as they carried out the theft.

Lady Archer, 62, said: "A van arrived at 6.15pm on Tuesday evening, in a neighbours' front area, which unfortunately is not secure. It backs against the boundary fence between the two properties. They cut a hole in the wire mesh fence and entered our garden.

"They helped themselves to some tools out of our tool shed, then removed the statues, which is not easy to do because they were securely fixed in place. I would think it would have taken two men quite considerable effort to move them. They left at 7.57pm."

Girl Doing A Handstand was bought from the late sculptor Sydney Harpley in 1986 while Shepherd And Sheep was made for them by Christopher Marvell in 1998. The piece attracted notoriety two years ago when a biography of Lady Archer by Margaret Crick revealed that Lady Archer had asked Mr Marvell to reduce the size of the shepherd's penis.

Police say the break-in is the latest in a series of metal thefts in the region and believe that scrap is being stolen and shipped for recasting. A spokeswoman said. "We suspect it is being re-used in China and the Far East."

Detective Sergeant Dean Wiffin added: "The sculptures were sawn off their base before being taken from the garden. These sculptures would have needed a large vehicle to move them."

The sculptures were all acquired over the years by Lord Archer, 66, the multi-millionaire novelist and former Conservative Party vice-chairman who was jailed for four years for perjury and perverting the course of justice at the Old Bailey in 2001.

"It is mainly Jeffrey's thing,î said Lady Archer. "My thing is more the house itself and its furnishings. Jeffrey is more the works of art. But I love having them around."

Among the other pieces they own are a girl in a deckchair, naked apart from a sunhat, and another statue called Sun Workshiper.

There is also a stone relief caricature - technically a "grotesque" - of Lord Archer himself. That was not stolen.

It is all very well offering a reward Mary, but the 2002 Proceeds of Crime Act prevents rewards being paid.

I am afraid your honourable offer will fall on deaf ears.

For more information on rewards just get Lord Archer to talk to Lord Rothschild, who tried, in vain, by offering a reward for the recovery of his £100 million gold box collection, Police threatened Lord Rothschild and Ex Scotland Yard Art Detective Charles Hill, that they would be prosecuted if they paid a reward for the Gold Boxes.

The Mexican Stand Off continues.
Posted by Art Hostage at 7:13 pm

How many sculptures "Girl Doing A Handstand" did Sydney Harpley create? There is one in Jersey....