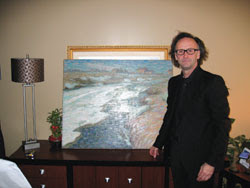 A $300,000 painting stolen nearly 18 years ago from the McGill Faculty Club has been retrieved and returned to the university, The Suburban has learned.

On May 21, 1990, an 87-year-old oil painting called Spring Landscape-Athabasca by Quebec impressionist Marc-Aurèle Suzor Côté was stolen after a break-in at the McTavish Street institution. The Suburban broke the story in the June 13, 1990 issue, in a report by former Suburban reporter Gerry Wagschal. According to the story, the theft was kept secret by club authorities for nearly a month to prevent copycats.

Christopher Marinello, executive director and general counsel of the U.K.-based Art Loss Register’s New York office, told The Suburban last week of the painting’s retrieval. His office has a copy of the original Suburban story.

“Believe it or not, I could not have done this [the investigation] without the story. You get the details, it helps me with the contacts. It’s always good to start with the news reports.”

The register contains the world’s largest database of stolen art, with more than 200,000 items listed. The organization works with police forces around the world, including Interpol.

“We have a team of people who go through every auction house in the world that subscribes to us — eBay and all sorts of fairs and shows, looking for what’s on our database,” Marinello explained. “In this case, an auction house that’s a subscriber to the Art Loss Register — known as Ritchies, in Montreal — did the right thing.

“They search high-end items with us to make sure they’re not selling anything stolen. An item that was consigned to them — this particular painting — they checked with us and we were able to confirm the missing Suzor Côté painting. We then went into our recovery mode — contacting the auction house, notifying them there is a match and asking them to pull the piece from the auction, not to sell it. They were very cooperative.”

Also cooperative was the painting’s then-owner, a convenience-store owner, who had asked Ritchies to sell the painting.

“[The owner] contacted me and, via e-mail, I urged him to seek counsel. He did get an attorney. I presented the facts of the case, the original police report and the Interpol listing. This gentleman agreed to return the picture.”

Marinello said the painting’s owner received the Côté work as part of an arrangement with a distributor who owed him money. “The guy couldn’t pay him and said ‘take the painting instead.’ Years later, he decided to sell it and get the money out of it, and it turned up on our database.”

The painting was verified as the one stolen in 1990, and was returned.
Art Hostage comments:
If the convenience store owner did not know this was a stolen painting then he is the victim of a sting and I feel for his loss of monies owed.
However, if this store owner did know the painting was stolen then he is a moron for thinking he could sell it at auction.
Gone are the days when a stolen painting can be sold via an unsuspecting auction house.
When it comes to stolen paintings, once stolen always stolen !!
Posted by Art Hostage at 8:18 pm