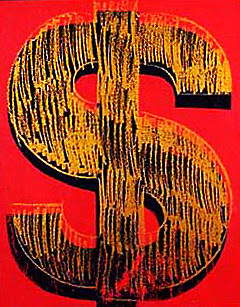 Jason Beltrez, an unemployed Brooklyn dad, says he bought a red painting emblazoned with an orange dollar sign at a flea market 10 years ago - but only recently found out it was an Andy Warhol worth hundreds of thousands of dollars. 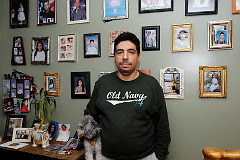 Beltrez, 44, and the mega-auctionhouse Christie's Inc. were sued in Manhattan Supreme Court by a SoHo gallery claiming the painting was stolen from its showroom in February 1998.

The Martin Lawrence Galleries filed the lawsuit, which became public Tuesday, after Christie's checked with the Art Loss Register before putting the painting - one of two "Dollar Sign" Warhols stolen from the gallery - up for sale and after Beltrez approached Christie's with the artwork last September.

Beltrez, who lives in Park Slope, said Tuesday that he bought the painting for $180 in New Jersey 10 years ago.

"I bought it from an open-air market," said the father of three and former C-Town supermarket manager.

Beltrez said the painting hung on his wall until last fall, when a pal suggested it might be the work of the late pop artist.

"A friend said something about the Campbell's Soup guy," Beltrez said, referring to Warhol's famous red-and-white soup can series. The painting, made in 1981, is part of a series of pieces he made of the dollar sign beginning in the 1960s in different colors and sizes.

It was estimated to be worth up to $400,000 by Christie's when the auctionhouse appraised it last year, an art world source confirmed. Another, larger, painting in the series sold for $4.5 million in 2006.

On Sept. 18, Beltrez took the painting to Christie's, a move that ultimately reignited a long-dormant NYPD investigation into the theft of the gallery's two missing Warhols. The Police Department confirmed that its major case squad is investigating but offered no further comment.

Beltrez, who used to live in lower Manhattan, has not been charged with a crime.

"If I knew it was stolen, would I go to Christie's?" Beltrez said, adding that cops said they wanted to give him a polygraph but never followed up.

According to court records, Beltrez has a criminal record dating back to 1996, and includes drug, disorderly conduct and patronizing a prostitute charges.

Gallery officials said they were delighted to find the painting - even if they don't have their hands on it yet.

"We are most pleased with the recovery of this unique artwork by Andy Warhol," said Eric Dannemann, president of Martin Lawrence Galleries, which has dealt in Warhols for years. Christie's was named in the suit, but as a "disinterested third party," according to its chief counsel, Keith Carlise.

"We are simply storing the work of art until the lawsuit is resolved," Carlise said.

The question of who owns the painting is in the courts, though art theft experts say the law clearly protects the art's title owner, the gallery.
ArtHostage comments:
Jason, if you are going to try and collect any money for this stolen Warhol, then it would have been better to relinquish ownership claims and then ask for a finders fee as reward.
Your story, although plausable, has to stand up to scruntiny by Law Enforcement.
Otherwise you may find yourself at the wrong end of a Federal indictment.
Personally, from decades of experience in these matters, I think the whole "bought it at a Flea market" story is, how shall I put it ?
Smell that air around Jason Beltrez, is the stench Cows, is the stench Sheeps, I know the stench is Bull-Shit of the highest order.
The outcome will be worth noting for future reference !!

My name is Arianna Beltrez, and I am one of Jason Beltrez's children. I am writing because I am thoroughly disgusted with the way my father is being depicted in recent articles and online postings. My father is a living, breathing, human being just like any other. He has a family, friends just like the next individual..just like you do. He does not deserve to be publicly degraded and called a "jobless patsy." Yes, my father is currently unemployed. He is also a homeowner, he also pays his taxes, and he always looks for the welfare of his children and family. Jason Beltrez is a great man, he is kind and caring and a great dad. Why are people so quick to judge him? All he did was buy a painting. How was he to know of its sordid history? Why is everyone so eager to drag him down when what they should be doing is trying to seek out the guy who actually stole it? Its very sad to see that people who have never had the privelage of meeting my dad would be so quick to speak so ill of him. If my father did in fact know that the painting was stolen, why on earth would he have taken it to Christies??? And by the way, it is protocal for auction houses such as Christies to check anything that they come accross against the Art Loss Register. They didn't do so because my dad seemed "weird" or "not normal" to them. And as far as Chris Marinello's comment that my dad is "not your typical Andy Warhol cosigner," I am truly sorry that my father is not a white man wearing an Armani suit Mr. Marinello. I am not trying to offend anyone with what I am saying. All I am trying to do is defend my father from what I feel is some of the ugliest, most disgusting commentary I've ever read in life. Why wouldn't anyone get all of the facts and double check them before tearing an innocent man down?

Arianna, your steadfast defence of your father is a noble, honourable thing and for that, your family should be proud of you.

I admit I have jumped to conclusions because the likelyhood of not one, not two, but three valuable stolen artworks turning up in New York in quick succession leads me to think the worst.

However, I could be wrong and if so, I sincerely wish your father the best of luck in getting some kind of reward as finder.

I am sure you remember the New York lady Elizabeth Gibson, who supposedly discovered a Million dollar stolen painting by Mexican Rufino Tamayo in a trash dumpster.

She seems to have gotton some reward so perhaps your fathers lawyers can approach this matter is similar fashion.

However, do remember Steven Olsen, who pled guilty to stealing the Goya, having said he found the Goya painting in his basement.

Law Enforcement will want to know every little detail to confirm your fathers story, once convinced, then and only then will your father have any chance at receiving a reward.

If your father gets cleared of any wrongdoing then I will most certainly post it, with a public appology included.

Arianna,
Your father WAS offered a finders fee. A substantial one. He got greedy and demanded half the value of the work. As for the comment that he was "not your typical Andy Warhol consignor"...it has nothing to do with race. You are now playing the race card. The comment was made by the auction house specialist who noted the track marks in your father's arms. Your defence of your father is admirable but you should sit him down and have a father daughter talk with him. If he really wanted to do the right thing he would not be holding the ARTwork HOSTAGE for money.

Arianna, the garbage picking lady got a $15,000 reward for the Tomayo painting which was worth $1 million. This Warhol is worth only one-third of that. So, if there is a reward, it should be $5000.00. I read that your father turned down the 5K. What's with that? Talk about ugly and disgusting. GREED

I'm not so sure this guy does pay his taxes. There seems to be a number of liens on the property in Brooklyn that he lists as his address on the complaint.
just the facts please