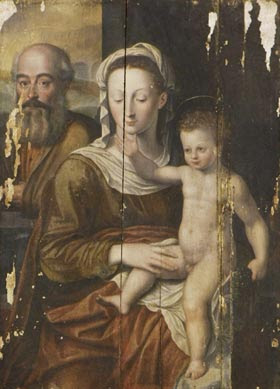 Italian police have recovered 10 masterpieces stolen in 2004, including depictions of the holy family and the whipping of Jesus.

The paintings had been stolen from the halls of Santo Spirito in Sassia, a religious complex near the Vatican.

They were discovered in good condition, wrapped in newspaper in the trailer of a suspected art smuggler, Italan police said Tuesday.

Police art squad chief Gen. Giovanni Nistri said the paintings had a value of about $5.3 million US.

Among the works are the painting Holy Family, showing Mary, Joseph and baby Jesus.

The painting is the work of Flemish master Hendrick van den Broeck, who also decorated the entrance of the Sistine Chapel, according to an expert in 16th-century art, Claudio Strinati.

The work had previously been attributed to Parmigianino, a contemporary of Michelangelo.

Also discovered was The Flagellation of Christ, a 17th-century painting by Giuseppe Cesari, a painter also known as the Knight of Arpino.

Police said they discovered the works in December during an investigation of art smuggling.

Gen. Nistri said there was evidence the smuggler intended to try to sell the works outside Italy.

The man is not believed to be behind the theft, which is still under investigation, he said.

Works valued at 183 million euros ($243 million) were reclaimed in 2008, compared with 82 million euros the year before, General B. Giovanni Nistri of the Italian military police said at a news conference today in Rome.

The art doesn’t include pieces voluntarily sent back to the country by foreign museums and collectors.

Italy’s rich archeological heritage spans the entire peninsula, including Etruscan tombs and Roman villas. Italy in recent years has pushed for the repatriation of pieces allegedly smuggled out of the country from clandestine excavations. Some of those works have landed in collections at the world’s most famous museums.

The number of known illegal digs in Italy last year increased by 15 percent to 238, mostly in the area around Rome, the Carabinieri police said. Ten paintings were recovered on Dec. 19 following a raid on a camper van parked in the city. The paintings were taken from the 12th century Santo Spirito in Sassia basilica in Rome in 2004.

The most valuable piece recovered was a damaged oil-on-wood painting of a Madonna with Baby Jesus attributed to the 16th century artist Francesco Mazzola, more commonly known as Parmigianino. All the recovered paintings were “well packaged and ready to be exported from Italy,” Nistri said.

The Culture Ministry, along with the Carabinieri police, announced separately that it had returned 2,200 archeological objects, mostly antique coins, to Bulgaria today. The objects had been seized in Italy in 2005 and were found to have been stolen and then exported from Bulgaria, according to an e-mailed statement.
Posted by Art Hostage at 8:51 pm