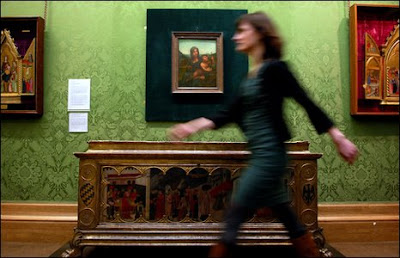 The Madonna with the Yardwinder was taken from the Duke of Buccleuch's home at Drumlanrig Castle in Dumfriesshire in August 2003.

It was recovered in Glasgow in 2007 and has now been loaned to the National Gallery of Scotland in Edinburgh where it has been put back on display.

Eight men have been charged in connection with the theft.

The artwork has an estimated value of £30m and is the only Leonardo painting in Scotland.

Painted in oils on a small panel, the work depicts the Madonna with the infant Jesus and a cross-shaped, wooden yarnwinder.

Experts believe it was created between 1500 and 1510 for Florimond Robertet, a trusted minister and diplomat of the King of France, who had close ties to Italy.

Leonardo had a poor record when it came to completing his works and the extent of his direct involvement in the painting is the subject of much debate.

Art specialists have said the overall design, the figures and the rocks in the foreground are his but the background landscape was probably added or completed by another artist.

The painting was featured in an exhibition at the National Gallery back in 1992.

A spokeswoman said the gallery was delighted the painting could go back on display.
-
Art Hostage Comments:
-
The Da Vinci Madonna is Scotland's own Mona Lisa and accordingly it is only fitting to be displayed in the National Gallery
Posted by Art Hostage at 5:43 pm