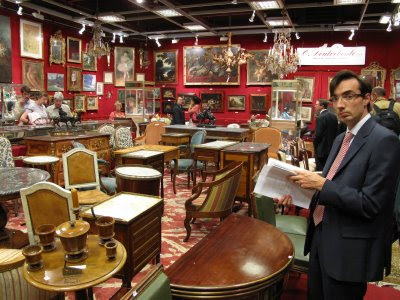 An auctioneer and eight commission agents were given preliminary charges, including "organized theft," the prosecutor's office said.

Three others detained last week in the police raids on Drouot, its warehouses and homes of employees were released with no charges filed against them.

When the bust was announced last week, there was initial confusion about which Courbet work had been recovered. The painting - stolen several years ago from a collection whose owner had recently died - was not clearly identified, and the heir had confused it with another work, an official close to the inquiry said. He spoke on condition of anonymity because the case is ongoing.

The stolen Courbet - one of several paintings by the convention-smashing realist master with a stormy ocean theme - was found at the home of one of the commission agents being investigated. Other pieces recovered in the sweep included artworks, frames and furniture.

Under French law, preliminary charges give the judge more time to investigate and determine whether to send the case to trial. Three commission agents were jailed in the case, with the prosecutor's office accusing them of deep involvement in thefts dating back to 2001.

The auctioneer was released pending the investigation with the stipulation that he stop hosting sales.

Drouot is a large auction house in a sprawling 19th-century building in central Paris. It auctions fine art and antiquities, as well as such objects as pieces of the Eiffel Tower and mime Marcel Marceau's top hat.