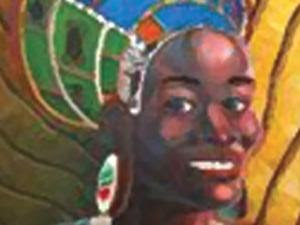 This oil painting, Zulu Maiden, was stolen from the JAG.

All the thief needed was a couple of minutes alone, enough time to take the painting off the wall and slip it into his oversized art folder.

He represents a new kind of South African thief, one with a knowledge of art and a willingness to take the risk of tapping this new criminal resource.

The thief had gained entry to the Sandton art dealer’s house by saying he wanted to show some artworks. As the dealer was out of the room making tea, he took the opportunity to remove the George Washington Brownlow painting off the wall.

The man might have got away with it, had it not been for the private investigator tasked with recovering the painting.

Kyle Condon, of D & K Management Consultants, set up a sting. He tracked the man to Mpumalanga and, pretending to be interested in buying the Brownlow, organised a meeting.

“He did make claims that he had certain other art available,” said the PI.

He had also tried unsuccessfully to sell the artwork in a gallery.

Condon got his man, recovered the painting and returned it to the owner, who didn’t wish to press charges.

It is a rare success story at a time when art theft is on the increase.

Over the past couple of months, Condon has been approached by several clients, most of them gallery owners who wanted him to recover stolen artworks.

“Not specifically art theft but the incidents of thefts from museums and art galleries escalated between 2010 to 2011.”

Those doing the stealing, Benson said, fell into three main categories. “The first-level thief is the person who steals because he was there and thought something could net him a couple of bucks – usually your druggies fall into this category.”

The level-two criminal is more sophisticated. “He breaks in looking for, let’s say, electronic equipment, then stumbles across an artwork, something he has heard of, and decides to steal.

“But there is often a problem. More often than not they steal something too valuable or well known to be able to sell; sadly, these items are usually destroyed to get rid of evidence and hide the crime.”

Benson, who used to work on the SAPS’s Endangered Species Desk, which is responsible for investigating art crime, has had success only with catching level-one and two thieves.

Then you get level three, the criminal masterminds.

“You have the thief who knows his Pierneefs from his Sekotos and this is the dangerous fellow,” Benson said. “He does not get caught because either the item was ‘ordered’ or he already has a network into which he can feed the item.”

An important aspect of fighting this type of crime, Benson said, was creating awareness and getting networks to spread the news quickly when a theft occurred. - The Star