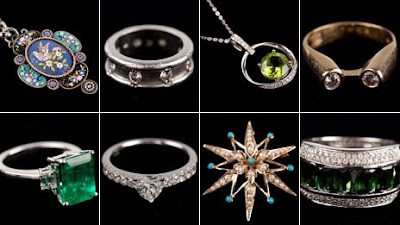 More than 300 items of jewellery were stolen from McTear's safe

Jewellery worth £430,000 stolen from McTear's Auctioneers

More than 300 items of jewellery were stolen from McTear's safe

Jewellery worth about £430,000 has been stolen during a break-in at an auction house in Glasgow.

A man was captured on CCTV entering the premises in Meiklewood Road at about 06:55 and leaving 20 minutes later.

A member of staff arrived afterwards to find the auction house unlocked, the alarm deactivated and the safe open.

Det Sgt Jane Lawson, from Strathclyde Police: "We have been checking CCTV as well as making extensive inquiries to trace those responsible for the theft of this jewellery.

"So far we are able to say that suspect arrived wearing a black woollen hat, a high-viz vest, and dark clothing and was carrying a black hold-all.

"A few minutes later a car with its headlights on arrived into the car park outside the auctioneers."

Det Sgt Lawson asked anyone who was in Meiklewood Road and saw a car leaving the car park of McTear's Auctioneers at about 07:20 to get in touch.

She added: "We are also releasing photographs of the jewellery which has been stolen.

"I would ask the public, especially those in the jewellery industry, to take a look at them and contact officers if they have been offered any items for sale."