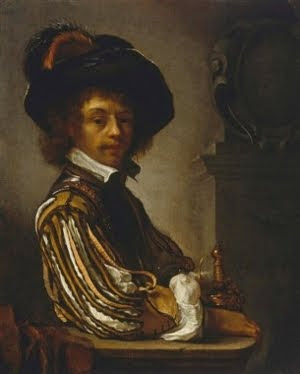 Giving Up on a Masterpiece

On June 10, 2007, a thief (or thieves, it's still unknown) walked into the Art Gallery of New South Wales in Australia and lifted a painting by Frans van Mieris the Elder from the walls. Somehow, the work, titled A Cavalier (or, sometimes, Self-Portrait as an Officer), which is valued at $1.4 million, was carried out of museum without witness.

For nearly five years, Australian authorities came up empty in its pursuit of the masterpiece. The Federal Bureau of Investigation posted the painting on its list of top ten art crimes, alongside the $500 million Isabella Stewart Gardner Museum heist that took place 17 years earlier, and the looting of a king's -- or dictator's -- ransom of antiquities looted after the invasion of Iraq in 2003. Also on the list was Cezanne's The Boy in the Red Vest, stolen after A Cavalier in 2008, and estimated to be worth nearly $100 million. The Cezanne, thankfully, was removed from the list after being recovered by police in Serbia in April of 2012. Such an occurrence heartens art loss investigators everywhere, reminding them that masterpieces are very rarely destroyed and, indeed, can be found.

However, just about a month after the Cezanne was recovered, startling news emerged out of Australia. The Canberra Times reported that Australian authorities had stopped trying to recover the painting. In fact, the investigation was suspended four years ago, in 2008, after "exhausting all avenues of investigation," according to Acting Sergeant Chris Nash.

Such news is hard to believe. Absent an active investigation, police in Australia are seemingly content to sit back and hope that the painting finds them. Without anyone in pursuit of A Cavalier, the chances that the painting will be recovered slouch towards the unlikely. Unless the holder of the painting foolishly tries to sell it to an auction house or an ethical buyer, the only hope for recovery rests on the arrest of someone involved on separate charges, or an attack of conscience by either the crooks or someone close to them.

These scenarios do happen. When someone is offered a painting for sale and they bother to vet it through law enforcement agencies such as INTERPOL, the FBI, Customs, or the for-profit Art Loss Register, they will receive notice that the painting is stolen. And at that point, the authorities can get involved to ensure that the painting is safely recovered. However, I liken this approach to looking for a needle in a haystack by waiting for the needles to make themselves visible.

Can the police not spare even one officer to pursue the painting? Is there not a single other investigation in the whole of Australia that can do with one less officer? Can the gallery not raise the funds to support just one full-time investigator to seek out the painting?

When a masterpiece goes missing, civilization loses a piece of its connection with the period in which it was created. When we abandon the search for such items, we are making a statement about our attitudes towards such matters -- a statement does not speak well of us as a people.

Mr. Amore has been the Director of Security at the Isabella Stewart Gardner Museum in Boston, Massachusetts since 2005. For the past six years, Mr. Amore has also served as the museum's chief investigator into the 1990 theft of 13 priceless works of art from that museum. Prior to joining the Gardner Museum, he was an Assistant Federal Security Director with the Transportation Security Administration, where he worked to rebuild security at Logan International Airport after the attacks of 9/11. He has also served as a Special Agent with the Federal Aviation Administration.

Mr. Amore's columns on homeland security issues have appeared in the Boston Herald.

He is a graduate of the University of Rhode Island and Harvard's Kennedy School of Government.

Anthony Amore makes a valid point, however, there was an opportunity to recover the Cavalier painting back in 2008, but the man tasked to investigate the theft on behalf of the New South Wales Insurance arm, Mike Maher, made it crystal clear to Art Hostage that there was no money available for recovery or expenses at all.

See the two posts, linked below to reveal the efforts of Art Hostage were thwarted by the mean spirited attitude of Mike Maher, which prevented the recovery of the Cavalier: