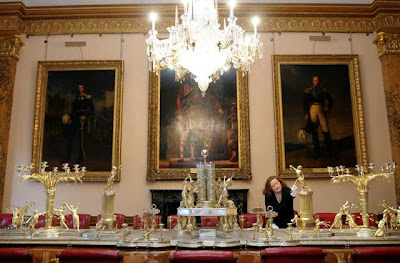 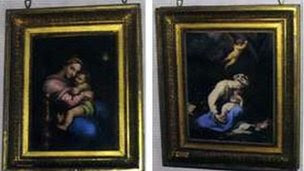 Three paintings, a bronze sculpture and ceramic objects have been stolen from Apsley House in central London.

The artworks were stolen from the private apartments from the home of the First Duke of Wellington and his family on 14 June, police said.

Among the items stolen were 19th Century paintings by Luigi Eusebi and a bust of the Duke of Wellington.

The Hyde Park Corner house was given to the nation by the seventh Duke in 1947, but the family retain the apartments.

The items stolen were a painting by Luigi Eusebi, After Romano: 'The Madonna and Child'; another painting by Eusebi, After Correggio 'La Zingarella'; a small miniature portrait of the Duke of Wellington painted on ivory and framed in ebony; a bust of the duke mounted on a black marble base and some small ceramic objects.

Police said they were studying CCTV footage from the property.

It was given to Arthur Wellesley, the first Duke of Wellington to celebrate of his role in the victory of Waterloo in 1815, according to its website.

The website adds: "It boasts one of the finest art collections in London, with paintings by Velazquez and Rubens as well as a wonderful collection of silver and porcelain."

The theft is being investigated by the Metropolitan Police art and antiques unit.

Apsley House was given to the nation by the 7th Duke of Wellington in 1947.

The house is administered by English Heritage on behalf of the government.

Waterloo battalion
‘gets the axe’

THE Duke of Wellington’s Regiment which has stood up to history’s most fearsome tyrants could finally be beaten — by swingeing cuts to our Armed Forces.

The battalion — whose modern-day heroes are fighting in Afghanistan — is threatened by plans to cut troop numbers from 102,000 to 82,000.

It took its name from the general who led his men to victory over Napoleon in the Battle of Waterloo 197 years ago tomorrow.

And it’s gone into battle against the armies of Kaiser Wilhelm II, Adolf Hitler and Saddam Hussein.

But now up to 650 soldiers will lose their jobs if David Cameron rubber-stamps plans by Army chiefs to disband the unit.

The PM has put off any announcement while The Dukes — now part of the Yorkshire Regiment — are on active service in Helmand.

Five of their soldiers were killed in an explosion in March and earlier this month Private Gregg Stone, 20, was shot dead by insurgents.

Mr Cameron would face a backlash if he axed the battalion so close to the 200th anniversary of Waterloo.

But he is under pressure to protect Scottish regiments to avoid playing into the hands of nationalists.

Shadow defence secretary Jim Murphy said: “Many of those who fought in the dust and danger of Afghanistan are being rewarded with P45s

“The country will be worried about the military impact and will want those made redundant to be given opportunities for work elsewhere.” The Dukes, then known as the 33rd Regiment of Foot, were involved in heavy fighting during the defeat of the French at Waterloo in 1815.

After his surrender, Napoleon admitted: “These dogs of English never know when they are beaten.”

The hero troops were given the honour of being renamed The Duke of Wellington’s Regiment on June 18, 1853 — on the anniversary of the battle after Wellington’s death.

In 2006, The Dukes were merged with two other regiments — The Prince of Wales’s Own and the Green Howards — to form the Yorkshire Regiment. Three battalions were set up and each of the old regiments kept its original name.

An MoD spokesman said: “We need to ensure Britain continues to have the best, most adaptable Armed Forces in the world. This means restructuring our Army in a way that has not been done for many years.

“It is right that time is taken to consider the military advice before final decisions are taken on the best structure to meet the Army’s operational needs for the future.”

THE Dukes dates back to 1702 when it was known as Huntingdon’s Regiment.

Since it was renamed after the Battle of Waterloo, It has seen action in the Crimea and two world wars.

It was awarded a Battle honour for its part in the Battle of Monte Ceco in 1944.

The 1st Battalion was deployed to Korea in 1952, Bosnia in 1994 and Iraq in 2003, along with tours of Northern Ireland during the troubles. Its soldiers have collected a total of nine Victoria Crosses.