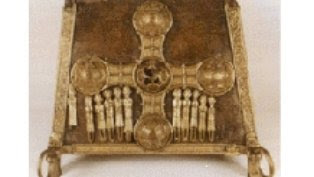 Suspects are also quizzed over theft in March at Dublin's Christchurch

TWO men arrested by gardai over the theft of one of Ireland's most important and precious works of medieval art from a Co Offaly church were released from custody last night as an "intelligence-led search" of a remote area near Doon, Co Offaly, led to the recovery of the priceless relic at tea time yesterday.

The shrine of St Manchan is now at Tullamore garda station where it will be forensically examined.

While in custody, the two men were also questioned about the theft of the St Laurence O'Toole relic from Christchurch Cathedral in Dublin in March. Both men are in their 30s and members of the Travelling community.

It was just before 6pm yesterday when gardai recovered the 12th Century reliquary containing the bones of St Manchan that was taken from St Manchan's Church near Lemanaghan in Co Offaly at lunchtime on Friday.

Speaking to the Sunday Independent last night, St Manchan's parish priest Fr James MacKiernan expressed his delight at the recovery by gardai of the priceless relic .

"We're absolutely ecstatic. We believed we would get it back at some stage and thanks to the very hard work of the gardai and the local people we will have back here very soon. It's still in the custody of the gardai but we believe that it's intact.

"We're just thrilled to be getting it back. I've already had a number of calls from parishioners and they're delighted," he said.

The theft took just 65 seconds to carry out according to CCTV footage in the church.

In what would appear to have been a carefully executed plan a lone, hooded man entered St Manchan's at 1:30pm.

Security footage from the scene shows how the thief pulled his hood across his face and paused briefly to put on a pair of gloves.

Having prepared himself, he then reached into a slim gap at the top of the case's front glass screen and forcibly prised it open by leaning back and using his body weight to break it from its hinges.

While the forcible removal of the heavy-duty screen triggered the case's alarm system, the thief remained calm as he lifted the 30kg reliquary out and made his way to an accomplice who is believed to have been waiting in a parked car outside the graveyard.

Gardai were alerted at 1:37pm. A car was later stopped on the N5 and the two men arrested.

The reliquary was not found in their possession.

The St Manchan shrine is an artefact of international significance and regarded as one of the finest pieces of medieval Christian art.

It is believed to have been constructed by monks from Clonmacnoise around 1130 AD and may originally have depicted 50 figures of saints but only 11 figures remain.

It was made in the 12th Century to house the bones of the 7th Century saint.

Meanwhile, the search continues for the preserved heart of St Laurence O'Toole that was stolen from Christchurch in Dublin on March 4.

In that instance, two men wearing hoodies walked into the church at around lunchtime and prised the relic from its display case.

Gardai were initially mystified by the theft of the St Laurence relic, also dating from the 12th Century, and the case received international attention.

There is no known market for stolen reliquaries and they would quickly attract attention were they to be brought on to the international market.

However, gardai believe that the relics may have been stolen in an attempt to secure ransoms or to barter in return for more lenient treatment for men facing serious charges.

Both artefacts have very little or no intrinsic value in terms of precious metal or even scrap value.

Gardaí in Co Offaly have recovered the 12th century shrine of St Manchan that was stolen yesterday.

What gardaí described as an "intelligence-led search" of a remote area near Doon, Co Offaly, led to the recovery of the shrine in the past hour.

It is now at Tullamore Garda station for a forensic examination.

Two men who had been arrested in connection with the theft were released without charge earlier. A file has been sent to the Director of Public Prosecutions.

St Manchan's Shrine, an intricate bronzework, was taken from Boher Church at around lunchtime yesterday.

The Bishop of Ardagh and Clonmacnoise, Dr Colm O'Reilly, said he was shocked and disgusted by the theft of what he described as "a priceless masterpiece of Irish Christian art".

Dr O'Reilly said there was an elaborate security system, complete with a camera, in place at the church where the shrine was stolen.

The bishop said the shrine is particularly significant for the people of Clonmacnoise, where St Manchan had founded one of the local monasteries.

He said the shrine, which is made of bronze and had been meticulously engraved, is one of the last surviving pieces from this very interesting period in Irish history.

Gardaí in Tullamore are investigating the theft of an artefact from a church in Boher, Co Offaly today.

St Manchan's Shrine, an intricate bronzework, was stolen this afternoon.

Suspicions were raised about a car that was seen in the area, travelling between Boher and Shannonbridge.

Two males were subsequently arrested on the M5 at Ronanstown, Co Dublin, and were taken into custody.

The men are being transported back to Tullamore Garda Station for questioning in relation to the theft.

Gardaí are searching the area between Ballycumber and Shannonbridge as they believe the artefact might have been dumped or hidden along that route.

The Bishop of Ardagh and Clonmacnoise, Dr Colm O'Reilly, has said he is shocked and disgusted by the theft of what he described as "a priceless masterpiece of Irish Christian art."

Dr O'Reilly said this evening that there was an elaborate security system, complete with a camera, in place at the church where the shrine was stolen this afternoon.

The Bishop has appealed for the public's assistance in the return of the shrine, which he said was particularly significant for the people of Clonmacnoise, where St Manchan had founded one of the local monasteries.

He said the shrine, which was made of bronze and had been meticulously engraved, was one of the last surviving pieces from this very interesting period in Irish history.