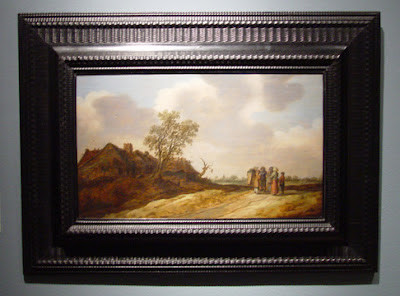 COPS have seized a suspected Rembrandt masterpiece — in Croydon.

Officers discovered the oil painting in a raid aimed at recovering stolen items.

Experts are to analyse the canvas to determine if it is by the Dutch master. If genuine it could be worth £50million. It was found in the South London suburb during a Proceeds of Crime Act probe into Shaun Stopford-Claremont, 62. He was arrested.

Witnesses said police were “incredibly careful” handling a seized painting. A source mentioned a value of £2million in connection with the discovery.

Police said a man in his 60s had been bailed. Attempts were continuing to “establish the provenance” of seized items. Mr Stopford-Claremont, of Redhill, Surrey, was unavailable for comment.

A BUSINESSMAN has been arrested in possession of what is believed to be a stolen Rembrandt painting.

The oil on canvas, believed to be worth more than £2 million, was recovered during a special police operation in Croydon High Street on Monday last week.

A man in his sixties was arrested and taken to Croydon Police Station.

Scotland Yard said the arrest was part of an ongoing Proceeds of Crime Act investigation by officers from the Met's specialist crime directorate.

Detectives refused to comment on whether a painting by Dutch master Rembrandt Harmenszoon van Rijn was among the items seized during the operation.

But a source told the Advertiser: "The way the officers were handling the painting and keeping it safe, they clearly believed it was a Rembrandt."

It is understood the painting has been sent away to experts to be authenticated.

The arrested businessman, who cannot be identified for legal reasons, lives in Surrey.

Rembrandt was the greatest Dutch painter of his age and is one of the most important figures in European art.

He was born on July 15, 1606 in Leiden and is famous for works such as The Night Watch, a group portrait of one of Amsterdam's militia companies and The Syndics of the Clothmakers Guild painted in 1662. Rembrandt's work often fetches huge prices – in December 2009 his Portrait of a Man sold at auction for £29.2 million in Christie's.

There have also been several notable thefts, the most famous of which is The Storm On The Sea Of Galilee which was taken from the Isabella Stewart Gardner Museum in Boston, USA, in 1990.

There is no indication this is the picture involved. The Met would not be drawn on details but released a short statement following the arrest.

A spokesman said: "A man in his sixties was arrested in south London on June 11 in connection with an ongoing Proceeds of Crime Act investigation.

"He has been bailed to return to a south London police station on a date in July pending further inquiries. A number of items have been seized in connection with the investigation."

Was this a lawyer returning a stolen painting and other stolen artworks as part of a deal?

Recovered from a premises on Croydon High Street suggests a Lawyers office, evoking memories of the Police sting at the Glasgow Lawyers office when the Da Vinci Madonna was recovered back in 2007.

However, in that case all accused were cleared of any wrongdoing.