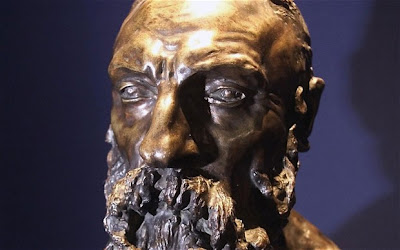 A stolen bust of Auguste Rodin, sculpted by his lover, Camille Claudel, has been recovered 13 years after it was stolen from a museum in central France.

The 17.6lb, 23 inch treasure was stolen from the Guéret art and archaeology museum in 1999.

Looking grizzled with a furrowed brow and full beard, the rare, signed bronze portrait of the French sculptor – a precious remnant of his passionate romance with Claudel – is reportedly worth up to one million euros (£800,000).

French detectives were surprised to find it inside the truck of an antique seller who had been under surveillance for weeks.

The suspect in his 50s was being followed in connection to a series of recent burglaries in the Lyon region. He was arrested with another man on June 19 in the town of Montbrison, in the Loire region, where he was found in possession of the Rodin bust, as well as other art objects, all now being investigated by the French unit specialising in stolen art, the OCBC.

"For the moment, the two men are having trouble explaining the origin of the bronze," a police source told the French daily, Le Parisien.

Catherine Wachs-Genest, curator of the Guéret for the last decade, said: "I never imagined I'd ever get to see it. There's a great feeling of satisfaction. We're very happy."

The bust completes the "vision" of the museum's permanent collection, and "shows a historic link between Rodin and Claudelle," said Ms Wachs-Genest.

She said investigators were still in possession of the bust, but it would be returned to its rightful home near Rodin's masterpiece, 1889 "The Kiss," of a couple embracing.

As well as being his lover, Claudel was a talented pupil and the muse of the sculptor. She became a sculptor in her own right, producing some 50 works, but signing relatively few of them.