Mainstream Dis-honesty When Fine Art and Antiques are the Question !! 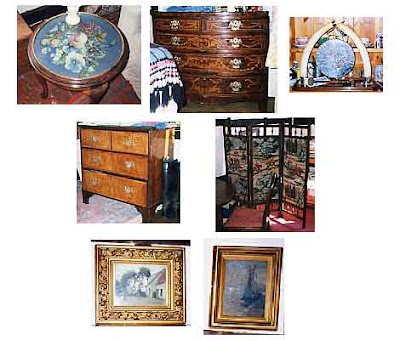 
A married couple and another man were involved in "fencing" an elderly man's stolen antiques through an auction house, a court was told yesterday.Dozens of antiques were stolen in raids on the home of Stephen Proctor in Chumleigh, near Barnstaple, after he developed Alzheimer's disease and went into sheltered accommodation, Gloucester Crown Court was told.

Some of his property found its way to the Cotswold Auction House in Cirencester, thanks to Glynn Chugg, his sister Michaela Poole and her husband Matthew Poole.

At Gloucester Crown Court the Pooles, both 25, of The Paddock, Cirencester, admitted handling stolen goods. Chugg, 30, of Swallowfield, Roundswell, Barnstaple, admitted acquisition and use of or possession of the proceeds of criminal conduct.

Also in the dock was Martin Hoyles, 45, of Evenston Road, Barnstaple, who admitted handling about £200 worth of the stolen property which was found at his home.

Pregnant Mrs Poole was ordered to do 50 hours of unpaid community work, her husband 100 hours, and Hoyles and Chugg 200 hours each.

Simon Burns, prosecuting, told the court the total value of the property involved was £13,018.

"This whole case involves the disposal and sale of stolen antiques from the home of the Proctor family in North Devon. The family estate is in Chumleigh and Mr Stephen Proctor lived there until he was sadly diagnosed with Alzheimer's and had to move out into sheltered accommodation," said Mr Burns.

"His house was then systematically burgled while it was empty from the end of 2004 and through 2005.

"The prosecution cannot lay blame for the burglaries at the door of any of these defendants. But a lot of the property found its way into the Barnstaple area where Chugg and Hoyles come from.

"What then took place was the offloading of those antiques to a suitable outlet which was the Cotswold Auction House in Cirencester. A large quantity of antique furniture and porcelain was sold there. The police investigation revealed that Michaela Poole entered the property into the auctions on five occasions.

"She falsely claimed the antiques to be hers to sell. She declared them to be 'my own unencumbered property'.

"Matthew assisted her and accompanied her to enter items into auctions. In mid-August, Matthew Poole arrived at the auction house with a large box full of property but by this time, the police had tipped them off and they were wise to what was going on.

"A common theme was that the items were of Chinese origin and came from the Proctor family. The family had originally been out in the Far East. One plate, described as Lot 672, a Yangtse dish, was worth £10,000. It is now abroad in Brazil, having been sold on."

Mr Burns said the Crown asserted that the criminal benefits derived from their crimes were: Hoyles £200, the Pooles £6,509 each and Chugg £9,671.

Recorder David Lane duly certified that those were the benefit figures but because none of the defendants had any assets, he ordered that only £100 be confiscated from each of them as proceeds of crime.

Gavin Mannion, for Matthew Poole, a Tesco worker, said he was of good character and a "very devoted" family man with four children and one on the way. The offences, he said, were borne out of naivete and a desire to help his wife.

Tim Evans, for Michaela Poole, said she was of good character and her baby was due in July.

For Hoyles, a mechanic, Giles Nelson said he was only on the fringe of the offending.

Simon Mooney, for Chugg, said: "He has been a fool and his foolishness should be punished. But it is not the sort of offending which requires the imposition of an immediate custodial sentence."


Seems like this duping of elderly people out of their fine art and antique Heirlooms has become mainstream and is going on unchecked, unless Police stumble across an offence.
Posted by Art Hostage at 2:27 pm

Hi there! Nice post, thanks for sharing a very interesting and informative content, it helps me a lot and to others as well, keep it up!