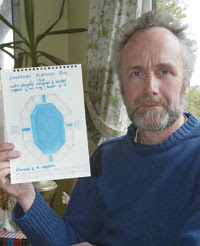 
A WIDOWER who is suing Thames Valley Police over the loss of his dead wife's engagement ring, has told a court the force had been "obstructive and arrogant".

Dr Keith Sugden, 54, believes his wife's ring was either accidentally incinerated or stolen after being put in a freezer in police custody.

His wife, Dr Joan Sugden, of Middle Road, Denham, was found dead in Broken Gate Lane, near Gerrards Cross, in November 2005. Police accept that she was wearing two rings when they discovered her body - which were later lost.

Dr Sugden has received compensation for the loss of his wife's wedding ring, but nothing for the engagement ring because of a dispute over its value.

He claims it was a 1920s art deco masterpiece worth £9,000 and is suing for around that sum, a fee for additional grief caused, and for costs.

Police however, deny the ring is worth that amount.

Dr Sugden, who represented himself at Uxbridge County Court last Thursday, said his solicitor had tried his best to settle the matter out of court, but the "obstructive and arrogant manner" of the police left him no option but to sue.

He said: "I am 100 per cent sure that she was wearing that ring about midday on the day that she disappeared."

He said the ring contained a two carat sapphire, 12 diamonds and 14 sapphire slips. It had been a gift to his grandmother.

Barrister Peter Stagg, for Thames Valley Police, suggested the jewels may have fallen off or she could have been wearing a different ring as only a plain band was found by police. This was visible in a photo taken of her body.

Dr Sugden however, believes the ring is swivelled around in the photo.

Mr Stagg suggested: "You were so angry, understandably some might say, about the disappearance of the property, you have convinced yourself she was wearing the ring."

Enis Lake, 54, a close friend of Dr Joan Sugden, told the court she never saw her without her ring, even when swimming or on holiday. Psychiatrist Dr Sugden, 57, suffered from depression and was found dead in woodland.

Police initially arrested her husband on suspicion of murder but he was not charged. A coroner later recorded an open verdict, saying there had been no foul play. It is believed she died from hypothermia.

The case was adjourned.


Posted by: pwish, everywhere on 9:59am today
Good Luck Dr Sugden, you're up against one of the most corrupt and self righteous organisations in the world, I hope you win.


Good Luck Dr Sugden, you're up against one of the most corrupt and self righteous organisations in the world, I hope you win. Quote Report this postPosted by: Sally on 11:24am today

give the man his compensation, they are just being completely arsey about this its sad.

give the man his compensation, they are just being completely arsey about this its sad.Quote Report this postPosted by: Jan on 12:15pm today

Another Public Relations disaster for Police.

The "Them and Us" Culture prevents co-operation between the public citizen and Police/Law Enforcement.

The appearance of arrogance sends a negative message to the Public and further alienates Police/Law Enforcement.

Far from being vilified by the public, criminals have a glamour attached to them, whereby Police/Law Enforcement are regarded as the real bad guys.

What a perverse, vacuous, mainstream dishonest world we live in, unfortunately.

Any chance of a good news story about Police being sensitive towards the public??