Retirement, Revealing, Confirming, without the Burden of Office 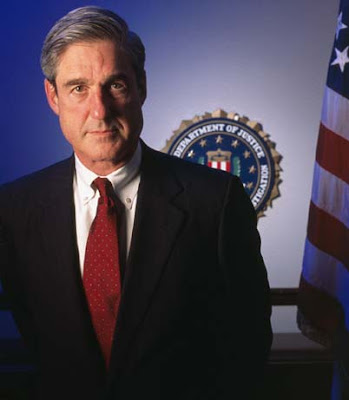 
FBI Director Robert Mueller says he pledged his agency's help against gang violence in Massachusetts during a meeting Friday with the head of the state police.

In an interview with "The Boston Globe", Mueller said he believes the FBI should help local law enforcement when it can to help cut violent crime. He said the FBI can help gather intelligence on international and interstate gangs, help track weapons and work to bring more gang cases into federal court.

He said Boston FBI officials have been meeting with Police Commissioner Edward Davis and other law enforcement officials about using more federal resources against gangs.

In a two-day visit to the Boston area, Mueller also has spoken to groups at Harvard University

White House and Pentagon officials, and particularly Vice President Cheney, were determined to attack Iraq from the first days of the Bush administration, long before the Sept. 11, 2001, attacks, and repeatedly stretched available intelligence to build support for the war, according to a new book by former CIA director George J. Tenet.

Although Tenet does not question the threat Saddam Hussein posed or the sincerity of administration beliefs, he recounts numerous efforts by aides to Cheney and then-Defense Secretary Donald H. Rumsfeld to insert "crap" into public justifications for the war. Tenet also describes an ongoing fear within the intelligence community of the administration's willingness to "mischaracterize complex intelligence information."


"There was never a serious debate that I know of within the administration about the imminence of the Iraq threat," Tenet writes in "At the Center of the Storm," to be released Monday by HarperCollins. The debate "was not about imminence but about acting before Saddam did."

White House counselor Dan Bartlett yesterday called Tenet a "true patriot" but disputed his conclusions, saying "the president did wrestle with those very serious questions." Responding to reports from the book in yesterday's New York Times, Bartlett suggested that the former CIA director might have been unaware of all the discussions. President Bush, Bartlett said on NBC's "Today Show," "weighed all the various consequences before he did make a decision."

In their threat briefings for the incoming Bush administration in late 2000, Tenet writes, CIA officials did not even mention Iraq. But Cheney, he says, asked for an Iraq briefing and requested that the outgoing Clinton administration's defense secretary, William S. Cohen, provide information on Iraq for Bush.

A speech by Cheney in August 2002 "went well beyond what our analysis could support," Tenet writes. The speech charged, among other things, that Hussein had restarted his nuclear program and would "acquire nuclear weapons fairly soon . . . perhaps within a year." Caught off-guard by the remarks, which had not been cleared by the CIA, Tenet says he considered confronting the vice president on the subject but did not.

"Would that have changed his future approach?" he asks. "I doubt it but I should not have let silence imply an agreement." Policymakers, he writes, "have a right to their own opinions, but not their own set of facts."

New details about the origins of the current terrorist threat -- and the way the Clinton and Bush White Houses dealt with it -- add to a growing body of information about the tumultuous late 1990s and the first years of the new century. For the future, Tenet describes his deepest fear as "the nuclear one." He is convinced, he writes, that this is where Osama bin Laden "and his operatives desperately want to go. They understand that bombings by cars, trucks, trains and planes will get them some headlines, to be sure. But if they manage to set off a mushroom cloud, they will make history."

Despite all efforts to thwart them, he says, "I do know one thing in my gut: al-Qa'ida is here and waiting."

The book breaks Tenet's long public silence since he resigned in June 2004 over what he considered White House attempts to turn him into a scapegoat, as U.S. efforts in Iraq were bogging down, for the faulty intelligence used to justify the invasion in the first place.

Tenet writes that Bush talked him out of resigning in May 2003. But he decided it was time to go nine months later when a book by The Washington Post's Bob Woodward quoted him as telling Bush in December 2002 that the intelligence case against Iraq was a "slam dunk," a statement he says was taken out of context but subsequently used by the administration to blame him for faulty Iraq intelligence. "I couldn't quit immediately over something that appeared in a book," Tenet writes, "but I didn't see any way I could or should stay on much longer." Bush made no attempt to keep him when he finally resigned in June 2004.

Tenet blames himself, among other things, for the hastily compiled October 2002 National Intelligence Estimate, which concluded that Iraq possessed chemical and biological weapons, issued on the eve of a congressional vote authorizing the war. The NIE, he said, "should have been initiated earlier. I didn't think one was necessary. I was wrong." The document, he acknowledged, was "not cautious in key judgments" and at times used single sources who turned out to be wrong.

A perennial problem, he writes, was a tendency by intelligence analysts to assume other people thought like they did. When judging whether Hussein was lying when he said Iraq had no weapons of mass destruction, "we did not account for . . . the mind set never to show weakness in a very dangerous neighborhood."

One of the "lowest moments of my seven-year tenure," Tenet recalls, was when a congressman told him in a public hearing in the spring of 2004 that "we depended on you, and you let us down."

Tenet's account of his CIA years moves through explanation, accusation, defensiveness and occasional apology. When he became acting director in December 1996, Tenet writes, he found an agency "in shambles," its budget slashed, its recruiting moribund and its morale "in the basement." Analysis and clandestine operations had deteriorated, and there was "no coherent, integrated and measurable long-range plan. That's where I focused my energy from day one."

Much of the first half of the book is a detailed account of what Tenet describes as efforts by himself and his lieutenants to meet the emerging al-Qaeda threat and to convince the White House to take aggressive action. Rejecting later criticism of CIA foot-dragging, Tenet writes that "after 9/11 some senior government officials contended that they were surprised at the size and nature of the attacks. Perhaps so, but they shouldn't have been. We had been warning about the threat at every opportunity."

He titles one chapter of the 549-page book "Missed Opportunities," but Tenet misses few opportunities himself to settle scores with Cheney and Rumsfeld and their top aides, and with Bush's first-term national security adviser and current secretary of state, Condoleezza Rice. He characterizes Rice as a "remote" figure who "knew the president's mind well but tended to stay out of policy fights." Under Rice, he says, the National Security Council failed to explore options and reach consensus. Rumsfeld, he says, refused to recognize worsening reality in Iraq and on several occasions undercut CIA efforts with cavalier treatment of secret information.

By contrast, Tenet's treatment of Bush, who presented Tenet with a Medal of Freedom six months after his departure, is relatively gentle. He says he and others sometimes failed to give Bush the information he needed. "The president was not well served," he says by way of example, "because the NSC became too deferential to a postwar strategy that was not working."

Tenet writes defensively about the controversial program to intercept domestic telephone calls involving terrorism suspects. The program was Cheney's idea, and the vice president briefed "the leaders of the House and Senate Intelligence committees 12 times prior to its public disclosure" in late 2005.

He reiterates a claim last year by Bush that the CIA's harsh interrogations of captured al-Qaeda figures "helped disrupt plots aimed at locations in the United States, the United Kingdom, the Middle East, South Asia, and Central Asia." He says the agency used "the most aggressive" techniques -- which he does not detail -- on "a handful of the worst terrorists on the planet" and that the questioning was "carefully monitored at all times to ensure the safety of the prisoner."

Tenet describes as "baloney" a claim made in a book last year by journalist Ron Suskind that the agency overstated the value of intelligence collected from al-Qaeda operative Abu Zubaida, whom Suskind depicted as "mentally unstable." Zubaida, Tenet says, was central to many al-Qaeda operations and shared "critical information with his interrogators." Sept. 11 mastermind Khalid Sheik Mohammed, he says, initially told interrogators that he would talk only after seeing a lawyer in the United States. "Had that happened," Tenet writes, "I am confident that we would have obtained none of the information he had in his head about imminent threats against the American people."

Al-Qaeda has responded to the U.S. intelligence focus on young Arab men as potential risks, he says, by recruiting "jihadists with different backgrounds. I am convinced the next major attack against the United States may well be conducted by people with Asian or African faces, not the ones that many Americans are alert to."

When public Officials retire they feel free to reveal some secrets about their role in public life, a sort of insiders views on the mechanisms of power.

As Robert Mueller is one of the longer serving distinguished Public Officials in the current Bush Administration, what will be the extent of Mr Mueller's memoirs?

Will the Gardner Theft and Whitey Bulger be topic's of debate?

I do hope the lack of ability, for obvious national security reasons, to reveal much about 9/11, and the circumstances of that dark day, will give Bob Mueller the impetuous to reveal more on the Gardner Theft and Whitey Bulger.