Swiss Cheese Policing Can Result in Losing your Head if you help Police !! 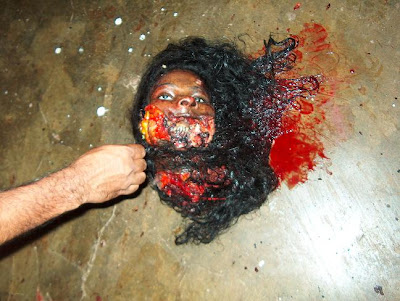 Pressure is continuing for an inquiry into claims anti-terror intelligence leaks had put lives at risk.
Deputy Assistant Commissioner Peter Clarke described as "beneath contempt" those who leaked details to the media.

Both government and police figures have come under suspicion. Tory leader David Cameron said a Whitehall inquiry was needed - but Tony Blair rejected that.

Commons leader Jack Straw said a police inquiry would be appropriate if anyone had "prima facie" evidence of a leak.

On Tuesday, DAC Clarke, the UK's counter terrorism chief, said there were a "small number of misguided individuals who betray confidences".

He did not specify where the leaks were coming from, but suggested culprits were trying to "squeeze out some short-term presentational advantage" through secret briefings.

In the Commons on Thursday, shadow commons leader Theresa May asked why, when newspaper reports suggested the source of the leak was the home secretary's special adviser, the government was refusing an independent inquiry.

Mr Straw said her allegations were "wholly unsubstantiated", but said the claims that there had been leaks were serious, and could interfere in a criminal inquiry.

Other reports suggest the leaks might have come from Scotland Yard itself.

The Lib Dems have written to West Midlands police to ask them to confirm they will be investigating the leaks. Home Affairs spokesman Nick Clegg told the BBC the Official Secrets Act may have been broken.

On Wednesday Mr Cameron's calls were rebuffed by the prime minister, who said "as far as I'm aware", no minister, civil servant or special adviser had leaked information.

On Thursday Mr Cameron told the BBC: "The truth is we can't find out unless we have a leak inquiry and that's why we need to have one."

The BBC has learnt that Home Secretary John Reid has already denied that his special advisers had anything to do with leaks of police anti-terror intelligence over the Birmingham raids in January.

Liberty director Shami Chakrabarti wrote to Mr Reid about the issue in February, shortly after reading about police concerns their operation was being undermined. She told the BBC she had got "a completely categorical denial".

Liberty has also put in Freedom of Information requests on the issue and also about what guidance was being given about handling requests for information on "ongoing operations".

The Home Office has asked for two extensions to reply, but has said it will do so by 3 May.

Labour MP for Birmingham Sparkbrook and Small Heath Roger Godsiff said there should be an internal inquiry to establish whether anyone in the police was responsible for the leak.

"If it is subsequently found that they had abused their position, there should be criminal charges preferred," he told the programme.

He said the same went for any Home Office officials, if they were involved. 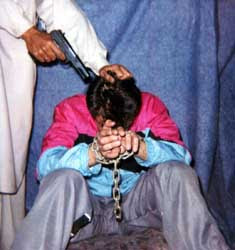 Jack Straw today rejected opposition demands for a full Whitehall inquiry into claims that officials leaked details of an anti-terror operation to the media before arrests were made.
Meanwhile, it emerged that the home secretary, John Reid, had denied earlier this year that officials from his department were involved in the leaks.
The Guardian has learned that journalists received up to three separate briefings from officials and police about allegations a group of men were planning to abduct and behead a Muslim British soldier.

Nine men were arrested in a series of raids in Birmingham in January; six men were subsequently charged with terror offences.
One of the officials who leaked information was from the Home Office, the Guardian has been told.
In a letter to Shami Chakrabarti of Liberty, the human rights pressure group, in February, the home secretary wrote: "I can ... assure you that my special advisers did not brief the media on operational matters on or off the record, and that it is not their practice to do so."

Mr Reid also noted that on the morning of the operation he "twice appealed to the media to stop speculating about the nature of the alleged plot".
In the Commons today, Mr Straw said that he "wholly deprecated and deplored" such leaks, but argued that the allegations potentially involved interference with a criminal investigation and were therefore a matter for police.

Opposition parties have demanded formal inquiries after Assistant Commissioner Peter Clarke of the Metropolitan police revealed concerns about a series of leaks and said that they could have placed lives at risk.

And the Liberal Democrats wrote to Chief Constable Paul Scott-Lee of West Midlands police asking him to confirm his force would launch a probe.

During prime minister's questions yesterday, the Tory leader, David Cameron, asked Mr Blair to guarantee that the leaks had not come from either ministers or special advisers.

The prime minister said that they had not come from those sources "as far as I am aware".
Referring to the Guardian's front-page story today, the shadow leader of the Commons, Theresa May, said: "Contrary to assurances given by the home secretary to the shadow attorney general, it is reported today that the source of the leak is the home secretary's special adviser.
"Why is the government refusing an independent inquiry?"

She said that the Home Office had twice delayed an answer to a freedom of information (FoI) request from Liberty about media briefing on the raid and demanded John Reid make a Commons statement "at the first opportunity".

Accusing her of "wholly unsubstantiated" allegations, Mr Straw said: "These are very serious allegations and I agree with those who say that if they are that serious then they should be investigated by the police and not by a conventional leak inquiry."

He pledged to follow up the FoI request.
For the Liberal Democrats, David Heath demanded Mr Reid come to the house on Monday to confirm a police investigation had been launched.

Mr Straw said he could not guarantee this, but that the home secretary was "assiduous" in responding to such requests.
Andrew Mackay (Con, Bracknell) said that the delay in dealing with Liberty's FoI request was "unacceptable" and "harming good governance".

Mr Straw said that the home secretary had the right, in appropriate circumstances, to resist FoI applications.
Julie Kirkbride (Con, Bromsgrove) persisted: "Given the importance of this matter and that life could have been put at stake as the police said yesterday, surely you will press your colleagues to come forward with that leak inquiry?"

Mr Straw replied: "It is precisely because I regard it as very serious that I think the appropriate avenue, if there is any prima facie evidence, is a police inquiry rather than a leak inquiry."
David Gauke (Con, SW Herts) hit back: "In recent years the government has undertaken leak inquiries into relatively minor matters such as details of the refurbishment of 10 Downing Street."

Mr Straw rejected this, saying it was a standard line from the Conservative "brief" on the issue.
Stressing again the gravity of the allegations, he added: "They potentially involve an interference with a criminal investigation.
"I think if anybody has prima facie evidence in respect of the leak - and I don't just mean newspaper reports - then it's a matter for a police inquiry."

Mr Cameron renewed his call for an inquiry today.

"This whole area is very worrying. It is very important that our police forces are able to do their job in terms of counter-terrorism, and the strategy of leaking and briefing and pre-announcing things is extremely dangerous in this area," he told BBC Radio 4's The World At One.

How on earth do Political leaders/Law Enforcement expect people to come forward with information if there is a real risk of their identities being leaked?

Not only do Informants NOT get paid, but now, they are hung out to dry and their identity is leaked just for good measure.

No wonder intelligence gathering has suffered a 90% fall in the last two years.

If this is how Law Enforcement and Politicians deal with gathering intelligence to prevent Terrorism, then the outlook for conventional criminal intelligence gathering is poor to say the least.

If anyone has important intelligence to offer Police, then for now keep it to yourself until there is a change of heart and incentive.

You have been warned !!