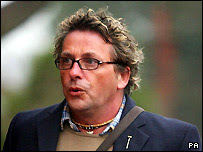 A TV antiques expert accused of stealing two paintings from an elderly woman's home has been found not guilty.
Michael Hogben, 54, of Dymchurch Road, Hythe, had denied one count of theft between 2 June and 4 November, 2005.

He appeared before Canterbury Crown Court on Monday where the case was dropped following legal argument.

Mr Hogben is known for his appearances on television shows such as the BBC's Bargain Hunt and ITV's Real Deal and is also an auctioneer and valuer.

A TV ANTIQUES expert accused of stealing two valuable paintings from a pensioner has revealed how he had to liquidate his pension fund to survive the two year legal battle.

Michael Hogben, 54, who hosted BBC’s Bargain Hunt and was best man at comic Vic Reeves’ wedding, said he was 'ecstatic' that the case had finally been thrown out of court.

Speaking after the case against him was thrown out at Canterbury Crown Court last week because of lack of evidence, Mr Hogben said: "Financially it has been stressful. It has almost ruined me because I haven't been able to work."

"I couldn't advertise my services and I couldn't work on television while this was going on.

"I've built up a pension fund over 20 years of hard work and I've had to liquidate everything to survive."

Mr Hogben said he was arrested after he valued two paintings at £100 each for a client and had sent them to an auction house to be sold.

The paintings, however, never arrived and the owner subsequently launched a legal battle saying the paintings were worth 'thousands of pounds' and that Mr Hogben had stolen them.

Mr Hogben, of Hythe in Kent, said: "I'm ecstatic. I think it was bizarre I was accused in the first place, and my lawyers and the judge thought so too.

"It should never have been dragged out this long. My first book came out in November last year and no-one turned up to the book signing in Hythe."

Mr Hogben had earlier denied one count of theft between June and November, 2005.

Judge Nigel van der Bijl told the auctioneer on Monday: “The case is now now over, you are an innocent man.

"The key to the case is the paintings and they have disappeared."

Mr Hogben studied art and spent 20 years in the antiques trade specialising in Victorian oil and watercolour paintings, and has been an auctioneer based in Folkestone for the past 15 years.