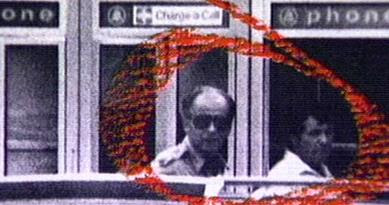 Bulger, one of the FBI's top ten most wanted fugitives, has been on the run since 1995. Now, Our Target 12 Investigators have learned there may have been a recent sighting of the gangster, and his girlfriend.

It was a tip that sent FBI agents just this month to Europe.

Law enforcement sources tell Target 12, notorious gangster James J. "Whitey" Bulger may have been spotted in Italy as recently as last month. And unlike other tips that often come into the FBI, this one, came with pictures.

Since his disappearance from the streets of Boston in the mid-90's, James J. "Whitey" Bulger and his companion Catherine Greig, have successfully eluded law enforcement.

So, when a source came to the drug enforcement agency with a picture of what looked to be Bulger and Greig in Italy, the feds took it seriously.

Bulger, is wanted for 19 murders and for running a criminal enterprise out of Boston.

There are two pictures: one of an older man with glasses. The other, his female companion. Sources say agents ran the photographs through facial recognition software. The computer was not able to determine if the photo of the older man was in fact, "Whitey" Bulger.

But, the results of the picture on Catherine Greig showed a possible match. Agents from the DEA brought their findings to the FBI-led "Bulger Fugitive Task Force."

Law enforcement sources tell Target 12 that after reviewing the findings, FBI agents flew to Italy just three weeks ago to follow the lead.

A spokesperson for the Boston office of the FBI as well as the Bulger Fugitive Task Force would not comment on our report.

But, the FBI- says neither Bulger nor Greig is in custody. It is unclear why the photos were given to the DEA originally, which is not part of the task force.

Bulger, now 77-years-old, is on the FBI's ten most wanted list along with Osama Bin Laden. The International manhunt has been on since Bulger fled prior to his January 1995 indictments.

The FBI says the last credible sighting of Bulger was in London in 2002, where agents found a bank account tied to the fugitive.


MILAN— Infamous Boston mobster James ‘Whitey’ Bulger was arrested Wednesday night at the Heavenly Acres trailer park in Milan where he has been hiding for the past three years.

Striking in the middle of the night, FBI agents set up barriers and surrounded the modest trailer. Bulger’s longtime girlfriend, Catherine Greig immediately surrendered, running out of the trailer with her hands over her head, dressed in a skimpy green negligee.

Bulger, however, refused to give up. He kept police at bay for several hours but finally surrendered after agents set up loud speakers and blasted Barry Manilow tunes at the building.

As the alleged leader of the Boston-based Winter Hill gang, Bulger is alleged to have been involved in scores of killings and is wanted for murder, racketeering, money laundering, narcotic distribution among other charges.

On the FBI’s ten Most Wanted List, Bulger was the inspiration for crime kingpin Francis “Frank” Costello, played by Jack Nickerson in the movie ‘The Departed’.

Bulger had successfully eluded authorities since 1998 but in the end the aging gangster’s body gave him away. A nurse at Androscoggin Valley Hospital official saw the 77-year old Bulger’s picture on America’s Most Wanted and recognized him as a former patient who had undergone minor surgery at the facility for hemorrhoids.

She notified authorities and is in line to cash in on the $1 million reward.

Burger and Greig locally went by the names Tony and Carmela Alto. Neighbors at Heavenly Acres described them as a quiet couple who enjoyed barbecuing on their Weber gas grill.

“They seemed so ordinary - just like regular folks,” said Mary Smith, who asked that her real name not be used. “Although come to think of it, they never had much company. And when they did it was always strange-looking guys with names like No-Neck and Li’l Antony.”

Another neighbor said the two did a lot of walking and Bulger was fond of the fried haddock plate at Northland Restaurant. He occasionally attended mass at St. Anne Church where he liked to pass the collection plate. Church officials said receipts for masses that Bulger worked were about 20 percent lower than usual.

The pair were regulars at Sunday night Bingo at the V.F.W. Club. One volunteer worker described Bulger as polite and said he liked to play a lot of cards. The worker, however, recalled an incident in which Bulger knocked over the card of a player sitting next to him after the player had called Bingo before him.

“It was apparent Bulger was mad the player had reached Bingo before him. He had been waiting some time for one letter and it was a big jackpot. He had a killer look in his eyes,” the volunteer said.

After his arrest, Bulger was taken before Berlin District Court Judge Ann Wallace for bail hearing. The mobster, rumored to have been a ladies man during his years in Boston, winked at the judge and asked if she remembered him. The judge was not amused, noting that the balding Bulger was hardly someone she would let under her robes.


That comment elicited an angry outburst from Bulger who had to be physically restrained. As he was dragged from the courtroom, Bulger yelled, “I can have you killed. You’ve messed with the wrong man.”

Well, it’s about time. Just like that wiley SOB to be hinding right under our noses, in a trailer park bunker in Berlin…..

Truth is Jimmy B (Whitey Bulger) and Kate Grieg are now in the South of France with view to visiting Ireland this Summer.

Perhaps even a brief visit to the south coast of England?

The reason why the DEA got the photo's is because the Bulger Squad historically may have been guilty of leaking info to Whitey via a third party of their plans so he can make good his escape before they arrive.

However, that was then and now the Bulger Squad are reputed to be clean as a whistle and totally honest????
Posted by Art Hostage at 6:36 pm