Diamond Heist, Must Be Graff's, inside job ? Once is Happenstance, Twice is Coincidence, Three times is Enemy Action 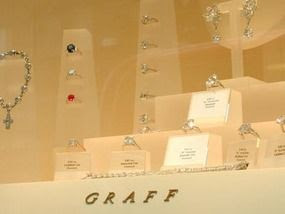 A DAPPER armed robber sporting a Panama hat made off with diamonds and gems in a £10million raid on a top London jewellers.

The robber and an accomplice posed as customers before threatening staff and escaping with the jewellery.

The robbers had walked into the internationally renowned Graff jewellers in Sloane Street, central London and pretended to be interested in making a purchase. Then they brought out their guns.

They ordered staff on to the floor while they emptied jewels into bags. Then they ran off towards nearby Sloane Square.
It is believed that they may have had accomplices waiting with a getaway vehicle.

It is understood that the haul includes a couple of “exceptional” items of such high value that the robbers may have difficulty finding a buyer.

A source close to the investigation said: “It will be quite difficult to find a fence to handle some of this property.”

The men are thought to be aged 40 to 55 and 5ft 10ins to 6ft tall. One of them wore a light suit, the other a light-coloured Panama hat, dark blazer and light trousers.

Flying Squad officers hunting the robbers want to speak to potential witnesses to the incident which happened on Thursday evening. Last night, detectives were examining CCTV evidence for clues.

A spokeswoman for Graff said: “It was a very distressing incident for all our staff who are very shaken up.

“Thankfully, there were no customers in the shop at the time. We are now open for business again, but the whole thing is very unpleasant.”

The raid was the third on a Graff shop in London in the last four years.

One theory detectives are working on is that the robbery was a “raid to order” carried out by a team from abroad.
In May 2003, three robbers stole jewellery worth more than £1million from the same Sloane Street branch.

It took three minutes for two members of an international crime cartel nicknamed The Pink Panther Gang to steal 47 items worth some £23million, at gunpoint.

Two of the gang, from former Yugoslavia, were caught and jailed.

But the mastermind, Yugoslav Predrag Vujosevic, remains at large – and only 10 per cent of the gems were recovered.

A Scotland Yard spokesman said: “Anyone with information is asked to contact the Squad on 020 7230 8666,

Art Hostage comments:
There is an old C.I.A. saying:
"Once is Happenstance, Twice is Coincidence, Three times is Enemy Action"
Could this be applied to Graff's ??
So, who is in the frame?

Going by the description it could be Clifford Hobbs and Noel Cunningham, the two escaped armed robbers ? The CCTV may give a better clue.

It must be said however, that Mr Hobbs and Mr Cunningham have also been put in the frame for the £53 million Kent cash robbery as well.

Alternatively, it could be Eastern Europeans attached to the Pink Panther Gang.
Where next will they strike?
Bonjour, it's Paris, Graff's again, Harry Winston, Aspreys, Cartier, spoilt for choice, still, shame no-one listens !!

Graffs the jewellers seem to be prone to this kind of robbery and have been hit several times before, not least the famous heist in 1980 when the Marlborough Diamond was stolen along with other high value diamonds.

The worrying thing is if these criminals turn their attention to Museums, Country houses or fabulously wealthy people in their Town/City homes.

An armed gang like this could steal millions in art and jewels using guns and would not hesitate to use deadly force if confronted by a householder or member of staff.

So, we have cocaine fueled, armed, traditional country house art thieves being joined by conventional armed robbers who may turn their attention to Museums and dwelling places if exclusive jewellers become to difficult to rob.

Just as cash armed robbers turned away from street robberies from security vans with the introduction of the helicopter and the Scotland Yard Flying Squad infiltrating their ranks, so the multi-million £/$ dwelling place and low security museum may be the next port of call for high value, high octane armed robbers.