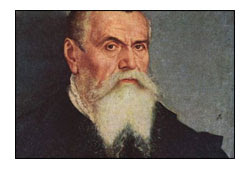 Bamberg, Germany - Four old-master paintings by Lucas Cranach the Elder (1472-1553) have been discovered in a German antique dealership, 27 years after thieves ripped them from a church in communist-run East Germany. The fold-out pictures on wood, each about 1 metre tall, apparently depict the birth of Saint John the Baptist.

The set would be worth several hundred thousand euros, art experts said. The thieves who took the paintings from the Lutheran church at Klieken near Wittenberg in 1980 were never caught.

The dealer had bought the colourful unsigned paintings on wood without suspecting they were stolen or by Cranach, the police said. An art expert noticed them on July 18 while shopping.

According to art professors consulted by detectives in Bamberg, only four or five experts in Germany could recognize Cranach's full range of work, so the dealer's ignorance was not surprising.

This is yet another classic case of a "Patsy" being put forward to either claim ownership or a reward for discovering the stolen Old Masters.

Derek Fincham over on Illicit Cultural Property nails it when he reveals the grey areas regarding legal title of stolen works of art.

Call me a sceptic, but for me this is the high value stolen handlers trying to sting their way to huge rewards or part ownership of these Old Masters.

As soon as one of these type of tricks is successful, then the flood gates will open and all manner of stolen art will surface.

Another one to watch, as with all the other stolen art recovered without arrests recently.
Coming soon,
revelations about art worth millions recovered last year in London, there were no arrests, other than the informant, who subsequently was not prosecuted as the C.P.S. decided not to further the Police request for criminal charges against the informant for trying sell stolen art back to insurers.
The informant, (not normally conected to the Art and Antiques trade, more of a second hand car dealer), was refused a Comfort Letter from Police, the insurence company refused to pay the reward without the Comfort Letter, or as Police call it, "A letter of absolute discretion"
The informant is now considering legal action against the Acton section of the London Met Police as well as the insurance company offering the £50,000 reward, and the ex-Police Art and Antiques Icon Detective, (who by the way collected a reward for recovering these three paintingas worth millions) who brokered the deal.
Details on .................... www.stolenvermeer.blogspot.com
http://www.stolenvermeer.blogspot.com/
Posted by Art Hostage at 4:36 pm