Raiders held a knife to the throat of former Atomic Kitten Kerry Katona and threatened to kill her during a robbery at her home.

The singer, her baby daughter Heidi and husband Mark Croft were held captive by three masked thugs during the attack at their mansion in Wilmslow, Cheshire.

The gang struck at around midnight, forcing their way into the beautiful red-brick property armed with a crowbar, sledgehammer and the blade.

Her publicist Max Clifford said 26-year-old Katona was "in floods of tears" and "distraught" following the ordeal.

Katona, five-month-old Heidi and Mr Croft, 36, were not hurt in the attack but left shaken, Cheshire Constabulary said.

While two of the men held Kerry and her baby captive, the third forced Mr Croft to show him around the house while he decided what to steal.

The family was then locked in a room while the men escaped with the couple's luxury blue BMW M5 car and thousands of pounds worth of jewellery and electrical equipment.

Katona and her husband freed themselves at around 12.30am and called police.

Mr Clifford said: "Kerry is in a terrible state. When I spoke to her this morning she was in floods of tears and absolutely distraught.

"My understanding is they held the knife to her throat.

"It was a terrifying experience. Luckily they weren't hurt, but Kerry was held at knifepoint and the robbers threatened to kill them. It was such a horrible thing to happen.

"Kerry and Mark managed to raise the alarm afterwards although the men had taken their mobile phones.

"They are staying with family now and I'm not sure when they will go back to the house.

"But as Kerry pointed out, a lot of people who carry knives use them, so we have to count our blessings."

The robbers stole around £150,000 of belongings, Clifford said.

The couple moved to the £1.5 million property only a few months ago.

Katona's two daughters by former Westlife star Brian McFadden, Molly and Lilly-Sue, were not in the house at the time as they were staying with McFadden's parents.

A Cheshire Constabulary spokeswoman said: "Shortly before midnight, Mark Croft, 36, his wife, Kerry Katona, 26, and their young baby Heidi, who was five months old, were confronted in their home by three masked men.

"All the intruders were wearing balaclavas and they were armed with a sledgehammer, crowbar and large knife similar to a kitchen knife.

"This experience was extremely alarming to the family.

"One of the offenders remained in a downstairs room with the mother and baby while the other two offenders made Mr Croft accompany them through the house while they identified property to steal.

"They were not harmed but were left shaken by their ordeal."

Kerry Katona, the former pop star in Atomic Kittten, was taken hostage today by armed robbers, who held a knife to her throat while other gang members ransacked the house.

The 2004 winner of I’m a Celebrity…Get Me Out Of Here was at home with her baby daughter and her husband when a masked gang armed with a sledgehammer, crowbar and large kitchen knife threatened to kill her.

Raiders held Katona, 26, and her five-month-old daughter Heidi in a downstairs room from around midnight last night, while Mark Croft, 36, her husband, was forced to lead the burglars through the house in Cheshire.

Three robbers stole £150,000 worth of valuables including a new BMW sports car, laptop computers, televisions and jewellery, according to Max Clifford, the publicist who represents the singer.


“Kerry is in a terrible state. When I spoke to her this morning she was in floods of tears and absolutely distraught,” Clifford said. “It was a terrifying experience. Luckily they weren’t hurt, but Kerry was held at knifepoint and the robbers threatened to kill them. It was such a horrible thing to happen.”

The family had moved into the £1.5 million house in Wilmslow, Cheshire only a few months ago. Katona’s two daughters from her previous marriage to Brian McFadden, the lead singer of Irish boy band Westlife, were not in the house during the ordeal.

Her marriage to McFadden ended acrimoniously after two years and the OK magazine favourite married Mr Croft, a former taxi driver, on Valentine's Day this year. Their wedding was held in Gretna Green, six days before the birth of Heidi.

The three of them were locked in a room while the robbers made their escape this morning. Mr Croft joined his wife and child once he had been forced to show the burglars around the house. They managed to free themselves and raise the alarm at around 12.30am.

Cheshire police said the family were “extremely alarmed” by the robbery. "They had not been harmed but were left shaken," a spokesman said.

The house is monitored by CCTV cameras but the three men wore balaclavas throughout the raid. Police today appealed for witnesses and information about the robbery, they released details of the stolen car - a blue BMW M5 with the registration number WF06 KMM. 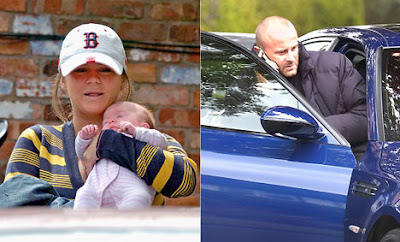 The armed burglars who held former pop star Kerry Katona and her baby daughter hostage at knife point let themselves in through an unlocked door, it has emerged.

The 26-year-old singer, her husband, Mark Croft, 36, and their five-month-old daughter, Heidi, were subjected to a terrifying ordeal by three masked raiders who stole more than £150,000 worth of property from her Cheshire mansion.

Police were initially baffled as to how the gang, who were armed with a sledge-hammer, crow bar and a large kitchen knife, got into the £1.5million five-bedroomed home, which has a state-of-the-art security system and CCTV cameras in every room.

But it has been revealed that neither Miss Katona or Mr Croft, who were watching a film in their basement cinema when the burglars struck, had bothered to lock the house or turn on the alarm.

It meant that the men, who were all wearing balaclavas and are unlikely to be identifiable from any CCTV footage, simply walked in through a side door.

Last night PR man Max Clifford, who represents Miss Katona, said: "We think the men got in through a side door which wasn't locked.

"Kerry and Mark didn't have the alarm on because they were in - they were downstairs in the cinema.
"It looks like the burglars thought no-one was in because there were no lights on upstairs and saw an opportunity."

The theft is the latest misfortune to befall Miss Katona, a self-confessed cocaine addict, whose problematic personal life has been played out in the media spotlight - and her own magazine column - since she first rose to fame with girl band Atomic Kitten in the late 1990s.

Following her split from boy band singer Brian McFadden, 27, the father of her two older daughters, Molly, six, and four-year-old, Lilly-Sue, in 2004, she has undergone a very public fall from grace, which culminated in allegations of drug taking and a spell in rehab.

She agreed to marry Mr Croft after a three week courtship and the couple tied the knot on Valentine's Day at Gretna Green this year.

But the union has caused friction between Miss Katona and many of her friends and family in Warrington, Cheshire, where she grew up, who claim Mr Croft is an unsuitable husband.

On top of that, they have sought to profit from her misfortune by taking it in turns to sell stories about her alleged cocaine binges and her unfitness to be a mother to the tabloid press.

Mr Clifford said Miss Katona had been particularly hurt by a recent story in one celebrity magazine which claimed that people in the 'Warrington underworld' hated Miss Katona and Mr Croft, a former taxi driver, and that it was only a matter of time before someone tried to harm her.

However, there was no suggestion Kerry knew the people responsible for Sunday night's raid and the article had been passed onto police, he added.

"Kerry is struggling to come to terms with what has happened," Mr Clifford said.
"She is sedated and is thinking of going away for a while while Mark sorts out the security - she is still terrified of going back to the house at the moment.

"When Kerry was a young girl she had to pull a knife out of her mother's leg that her mother's partner had stabbed her with.

"She's always had a real fear of knives - even in the kitchen the knives are covered up.
"This is bad enough for anybody but for her it was even worse because she has a real phobia about knives.

"As ridiculous as it sounds if it had been a gun it would not have been as frightening for Kerry.
"She has been sobbing uncontrollably and shaking and is in a real state."

Mr Croft has now met with a top security expert, who has provided protection for a string of Hollywood stars, including Tom Cruise and Nicole Kidman, in a bid to improve his family's safety.

Graham Freeman, a former member of the Army who has Special Forces training, spent just under an hour with Mr Croft at the property, in Wilmslow, an area which boasts some of the most expensive and desirable addresses in Cheshire.

Meanwhile, police continued to dust the home for fingerprints and have yet to recover any of the jewellery or other stolen goods, including the couple's wedding rings and their sporty £65,000 BMW M5.

The same gang who committed the Lowry theft in May this year are responsible for this dreadful robbery.

The death of an innocent householder is edging closer as these robbers are Cocaine fueled and would use fatal force if cornered.

What is being done about it?

From the looks of things very little.