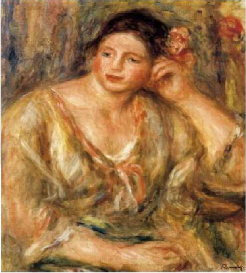 HOUSTON (KTRK) -- Houston police are asking for the public's assistance in identifying a suspect and locating a Renoir painting stolen in an incident earlier this month at a westside residence.

HPD officers say they were called to a residence near Woodway and Chimney Rock on September 8. The victim told police a suspect, described only as a white male wearing a ski mask and gloves, demanded money and jewelry. He was armed with a black semi-automatic weapon. The victim pointed out a Renoir painting on the wall and its value. The suspect took the painting and its frame and fled the residence. The victim was not injured.

The painting, Pierre-August Renoir's Madeleine Leaning on Her Elbow with Flowers in Her Hair from 1918, is part of a private collection at the Vaughn Christopher Art Gallery at 1217 South Shepherd.

A private business is offering a reward of up to $25,000 for information leading to the return of the painting. Anyone with information on the suspect or the painting is urged to contact the HPD Robbery Division at 713-308-0700 or Crime Stoppers at 713-222-TIPS.