Stolen Art Watch, Irish Lawyer Not Kean To Pay Up 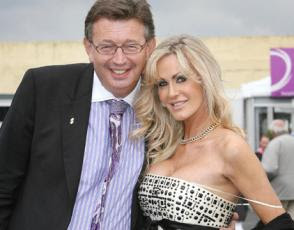 LEGAL eagle Gerald Kean has said he's going to leave the matter of his and fiancee Lisa Murphy's stolen jewellery in the hands of the gardai.

The flamboyant lawyer has indicated how he has no intention of engaging with anyone purporting to be selling back the haul, estimated to be worth €1.5m, taken from his Wicklow mansion.

"The matter is with the gardai now and I have 100pc confidence in them. I have read the reports about these phone calls but I'm more than happy to let the gardai handle the matter," he told the Herald.

He added how he had "no other comment" to make on the issue amid claims that various criminal gangs had made contact with him trying to sell back the stolen jewellery for a reported €75,000.

It included an engagement ring from Lisa's ex Michael Flatley as well as an antique ring that Mr Kean gave Lisa when he proposed 18 months ago.

The stash was taken during an aggravated burglary at his home in Brittas Bay last May 26 which saw four masked men tying up Lisa and threatening her with a knife during a terrifying ordeal.

A source close to Mr Kean said he has had a number of phone calls about the jewellery but there's no way of determining if any of them are genuine.

"It's not uncommon in high-profile cases like this, whether it's jewellery or pieces of art that was stolen, to get calls from all kinds of people claiming they'll give them back for a certain price," said the source.

"The problem is that the majority of them aren't genuine and are just chancers looking for an opportunity to take advantage of a situation.

"There's no way of determining whether they are legitimate offers so it's best not to take them too seriously," he added.

Mr Kean and his fiancee are still coming to terms with the shock raid.

She has been keeping a low-profile all summer long as she tries to get back to normal after the traumatic raid but she was pictured at an event in Ouzo's of Blackrock last week.