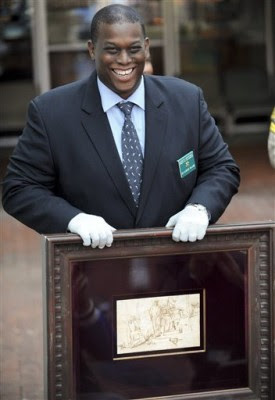 ON THE SURFACE it looked like an open-and-shut case: A pair of thieves drop by an art exhibition at the Ritz-Carlton, Los Angeles, and, while one distracts a curator, the other snatches a valuable, centuries-old Rembrandt drawing and bolts with it.

Apparently finding the small pen-and-ink work by the Dutch master too hot to sell, the thieves have second thoughts. They abandon it, undamaged, at a church on the other side of town. Then the real mystery begins.

Three weeks after recovering the framed, 11-by-6 inch drawing called “The Judgment,” authorities aren’t sure whether it really is a Rembrandt or if it even belongs to the art dealer that displayed it with other works at the Ritz-Carlton Hotel in Marina del Rey.

“They have to show us something to prove that they own it, and they haven’t been able to do that,” said Steve Whitmore, a spokesman for the Los Angeles County Sheriff’s Department. He said authorities are keeping the alleged Rembrandt under lock and key until the ownership issue is resolved.

Officials with the Linearis Institute, which says it owns the work that it values at over €200,000, did not respond to phone calls and email messages.

However, the institute’s attorney, William Klein, said Linearis purchased “The Judgment,” from a legitimate seller. He said the institute’s officials just don’t want to say who that was. Klein said:

Things like that really are trade secrets. We don’t believe we need to reveal trade secrets to get back what is ours.

He acknowledged the institute has no trail of paperwork (called provenance in art-world speak) to prove “The Judgment” really is a Rembrandt. But he added that officials at Linearis believe it is and it shouldn’t matter what authorities think.

Art appraisers and other experts have said they cannot find “The Judgment” listed in any catalogue or database chronicling the works of Rembrandt, who created hundreds of paintings, drawings and etchings before his death in 1669.

The Sheriff’s Department is continuing to investigate the theft, although Whitmore said Linearis officials have told authorities they are not interested in having the people who snatched the drawing prosecuted.

“Which I find curious,” he said.

Klein said Linearis is most interested at this point in getting its drawing back, although he added that if investigators happen to catch the thieves, “We’d like the Sheriff’s Department and the District Attorney’s office to do anything they need to do that’s in the interests of justice.”

Meanwhile, he said he’s hoping to work out a compromise that will allow the drawing’s return. If he can’t he says he’ll take the Sheriff’s Department to court.

Over 80 Rembrandts have been stolen in the last 100 years

Even in the art world, where questions about who owns what and how they got it arise frequently, the Rembrandt mystery has evoked curiosity.

It’s not as unusual as one might think for a low-level thief to drop in on an exhibition and grab something, said Anthony Amore, who is head of security for the Isabella Stewart Gardner Museum in Boston and co-author of the book “Stealing Rembrandts.”

He noted that just a month before the Rembrandt theft someone walked into a San Francisco art gallery and carried out a €150,000 Picasso. Police quickly arrested a New Jersey man they say has been linked to at least a half-dozen other art thefts since June.

Works by Rembrandt and Picasso are especially popular targets, Amore said, because everybody has heard of those artists and knows their works sell for huge amounts of money. In the last 100 years, he said, at least 81 Rembrandts have been stolen.

What is unusual, Amore continued, is that the Los Angeles thieves got away, only to dump the drawing two days later.

“No, that never happens,” he said. “That’s what’s incredibly intriguing.”

So is the Linearis Institute’s acknowledgment that it bought a work by one of the world’s best known artists without any proof he really drew it.

“Provenance is the key to authenticating a piece and something like this would have to have some sort of provenance behind it,” Amore said of the paperwork tracing a piece’s ownership, often back to the time it was created.

“It’s not impossible, but it’s unusual for an institute, or anybody, to purchase something worth a quarter of a million dollars with no bonafides behind it,” he said.

Confirming at this late date if Rembrandt really did the small drawing of a man kneeling before a judge could be difficult but not impossible, said veteran appraiser Mark Winter of Art Experts Inc. of Florida.

Doing so would require a side-by-side comparison of the work with an acknowledged Rembrandt drawing from the same period, as well as a search of Rembrandt books and other documents, which could be scattered all over the world.

Still, he said, every now and then someone confirms something as the artist’s work.

For years, he noted, Rembrandt’s “Self Portrait with Gorget,” which hangs in the Germanisches Nationalmuseum in Nuremberg, was thought to be a copy of the artist’s work that had been done by a friend. Then, in the 1990s, further study of documents and the painting revealed it was the real deal.

“I do not know the particular history and whereabouts of this drawing,” Winter said. “But potentially yes, it is possible it could be by Rembrandt’s hand.”

This really drove us crazy, so we dove a bit deeper, spoke to the Sheriff's Department's spokesman...there might be more here than we had expected...