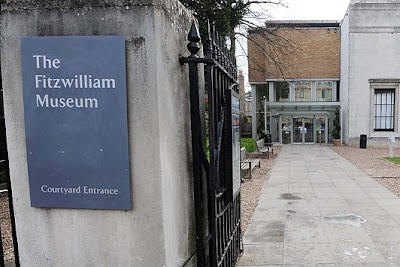 
Two men have been charged over the theft of a hoard of Chinese art from a Cambridge museum.

The 18 jade items from the Ming and Qing dynasties were stolen in a raid on the Fitzwilliam Museum last month. Some estimates have placed their value at £18 million.

A 15-year-old boy from London, who cannot be named for legal reasons, has been charged with the same offences.

Both will appear at Cambridge Magistrates Court today.

Detectives had originally said they were looking for at least four people in connection with the raid, which happened at about 7.30pm on April 13.

Three more people have been charged in connection with a burglary at Durham's Oriental Museum.

Adrian Stanton, 32, is accused of conspiracy to commit burglary, while Charmaine Wilkes, 27, and Fallon Arrowsmith, 19, are charged with assisting an offender.

Artefacts worth almost £2m were taken from the museum on 5 April.

The three, who are all from the Walsall area, will go before magistrates at Peterlee.

Another two men have already been charged in connection with the raid.

Justin Clarke, 30, from Walsall, was arrested by Durham Police after officers released his picture and said they wanted to speak to him. He has been charged with conspiracy to commit burglary.

Lee Wildman, 35, also from Walsall, appeared at Peterlee Magistrates Court on Thursday accused of conspiracy to commit burglary. He was remanded in custody to appear at Durham Crown Court.

Ten people in total have been arrested during the investigation into the burglary.

A 3ft wide hole was cut in the wall of the museum and a Chinese bowl and figurine were taken.

The Qing Dynasty bowl and figurine were recovered by detectives eight days after the theft, in the Brandon area of Durham.

Did the same in Germany

In May,1994,thieves broke down the service door at the back of the Fitzwilliam museum.They stole many, but not all, of the historic chronometers which had been set up in display casess during a horologists conference in Cambridge.They have not been recovered, I understand.This was when Simon Swynfen Jervis was the museum Director. (1990-95).Mr Duncan Robinson was the subsequent Director from 1995-2008 and he is now the Master of Magdalene College, Cambridge.He was an outstanding Director,but one wonders why the Directors from 1994 did not rebuild the service entrance with double steel doors, as installed now at the Ashmolean Museum in Oxford. A few years ago I raised the question of security at the Fitzwilliam Museum with Mr Duncan Robinson during questions after he gave a talk to the Friends of the Ashmolean Museum in Oxford.I am naturally concerned at this great loss and that the service doors at the back of the Museum, adjacent to the Peterhouse deer park - a very secluded spot- have been broken down twice in recent years. I am a Cambridge graduate and one of the Friends of the Fitzwilliam museum.I feel nothing but goodwill and gratitude towards the Museum and its staff.