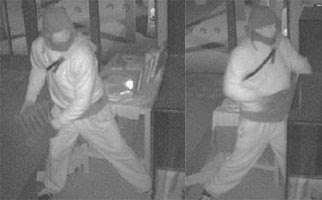 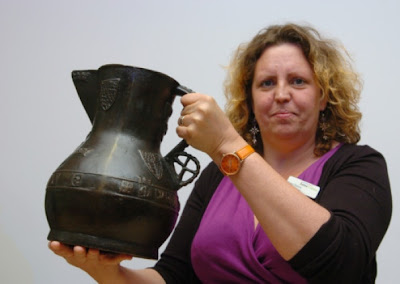 LUTON Culture has offered a reward for the safe return of a rare historic artefact stolen in a raid at the Stockwood Discovery Centre.

The Wenlok Jug, which was bought to Luton for £750,000 in 2006 and has strong connections with the town’s past was taken in a smash and grab raid at the centre on Saturday night.

Police yesterday released CCTV footage of the thief – a man dressed in a light coloured hoodie and a scarf covering his face and a Nike sling bag on his shoulder – smashing into the jug’s security case with what appears to be a gulley cover at around 11pm in what director of Luton Museums Karen Perkins described as an “aggressive attack”.

Despite the jug weighing a solid 6.1kgs, the man managed to throw the jug over the centre’s six foot perimeter fence and into a bush before making off towards Stockwood Park.

Centre bosses are in negotiations with an insurance company as to value of the reward but said that, as the jug is an alloy and not pure bronze, the real value lies in its antiquity and history rather than its scrap metal value.

Maggie Appleton, chief executive of Luton Culture said: “Our plea to the public is that anyone who has seen or heard anything that could help us recover the object rings Crimestoppers anonymously.

“The object is incredibly distinctive, there isn’t another one like it. It’s value is in its importance to Luton people, what it tells us about medieval life in Luton and medieval metalwork.

“We hope that people recognise its value and it isn’t melted down, we want to recover it that is our primary aim.”

Despite question marks being raised over the security arrangements surrounding the jug’s display, Ms Perkins said that the case – made with 13.4mm laminated glass and a polycarbonate compound with a dual locking system, alarm system and 24 hour vibrating alarm – was “the very best that we could purchase at the time”.

Museum bosses are investigating whether all the callout procedures envoked by the alarm system worked as they should and will be reviewing security at the centre.

Ms Perkins added: “We do what we can and what we think is reasonable to protect the objects with our alarm systems and everything like that. You can’t ultimately stop everything, the idea is to slow down people as much as possible that’s this high security case was so important and we need to look at the specification of all our cases and say do they give us the delay time we really do need to allow the callout and police to respond in that time or enough that someone attempting to break in to another case in the future will give up after a couple of minutes when they realise they’re running out of time.”

When asked why an exact replica of the jug wasn’t on show in the centre’s foyer instead of the real one, Ms Perkins said that part of the museum’s duty is to allow the public access to authentic historical objects.

She said: “We’re a museum and we’re about making our objects in the collection and the history of Luton available for people to enjoy. If we go round just putting replicas on display then what’s the point in keeping the originals, but there is always this constant conflict between making things accessible and protecting things.”

AN antiques dealer is to face a retrial on theft charges.

Lee Collins, 45, of The Heights, off Dyke Road Avenue, Brighton, is accused of stealing from three homes in London between March and June last year.

He stood trial at Harrow Crown Court earlier this month but the jury was discharged after failing to reach a verdict.

At a hearing last Friday the case was listed for a retrial on August 13.