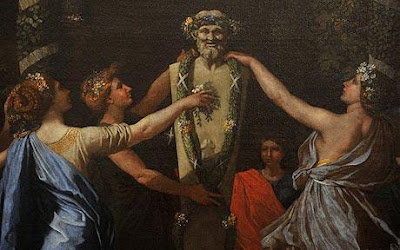 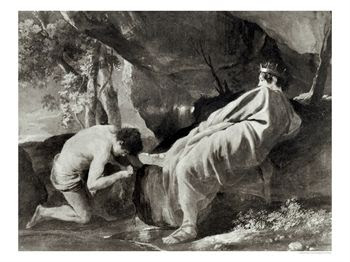 (Reuters) - Four paintings, including one by 17th century French painter Nicolas Poussin, have been found undamaged in a carpark in the Corsican capital Ajaccio more than a year after being taken from the island's Fesch museum, police said on Saturday.

Ajaccio public prosecutor Thomas Pison said police were told by an anonymous phone caller on Friday where to find the missing works, which include Poussin's "Midas at the Source of the River Pactolus", and Mariotto di Nardo's 14th century "Pentecost".

"The canvasses were lying on the ground (in the carpark) and one had been placed in a binbag. They're in good condition and are undergoing analysis," Pison told reporters.

The other works are Giovanni Bellini's 15th-century "Virgin and Child" and "Virgin with Child in a Glory of Seraphins" by an anonymous 16th-century Umbrian artist.

The four are estimated in all to be worth 10 million euros, and disappeared from the Fesch museum of fine art in February 2011.

Investigating magistrate Charlotte Dauriac, who received the anonymous telephone call, rushed to the scene with police investigators, finding one of the paintings in a plastic bag and the others simply leaning against a wall.

A night watchman at the museum was charged in the case two days after the paintings went missing.

When wildlife agents infiltrated the home of a small-town Alaska couple suspected of dealing illegal animal parts, they didn’t expect to find fine art among the couple’s loot. But amid the machine guns and illegal ivory, the pot and coca plants, sat five pricey Victorian paintings pilfered from a New England woman’s home in 2005.

Now that the Glennallen residents targeted in the investigation are behind bars, the government is trying to reunite the paintings with their rightful owner.

Jesse Leboeuf and his longtime companion Loretta Sternbach pleaded guilty in July 2011 to selling hundreds of pounds of illegal walrus ivory, at least two polar bear hides and two illegal machine guns. The plea agreement put the couple in prison, and the five paintings landed in the custody of the U.S. Fish and Wildlife Service.

“That’s a rarity,’’ said Fish and Wildlife spokesman Bruce Woods. “I’m not aware that we’ve ever seized artwork, other than handicraft, you know, illegal animal products used in artwork.’’

In a court filing Tuesday, the U.S. Attorney’s Office started the process of returning the artwork to its rightful owner. That’s probably an insurance company.

The court papers filed this week are just the latest chapter in the tale of the stolen paintings, which include highly sought after works from Dante Gabriel Rossetti and Mildred Anne Butler, among others.

“They were great paintings. They’d been in museums,’’ said Nicolette Wernick, the formerly wealthy widow from Connecticut from whom the paintings were allegedly stolen. “I always suspected the movers, but I never got any proof.’’

Wernick said she was moving from Massachusetts to a remodeled condominium in Bloomfield, Conn., in 2005. According to Bloomfield police, Wernick’s belongings were packaged to be sent to a moving company’s warehouse for about six months, then to the new condo. It was during this time that the paintings went missing, either snatched during the move, from the warehouse or from Wernick’s home, according to the local police.

It wasn’t until Wernick ventured into the basement of her condo that she realized the paintings were missing, she said. Court papers say she reported the theft in October 2005.

“I wept. I was terribly upset. I loved those paintings,’’ Wernick said. “I mourned them for years, and then I sort of got over it.’’

At the time of the theft, though, Wernick was tenacious about getting the paintings back, said Bloomfield police Lt. Mark Samsel, who led the theft investigation and is now the spokesman at the department, which serves a community of about 21,000.

“Mrs. Wernick is a pistol. She’s quite the woman,’’ Samsel said.

An insurance company paid Wernick’s claim on the stolen works, about $400,000, she said. The paintings are worth twice as much, she said.

Wernick, born in London and a longtime art lover, is hoping to get them back: The five paintings represent the last few pieces of a vast collection she assembled and was forced to sell after she was ensnared in the world’s most infamous Ponzi scheme.

“I lost all my money with (Bernie) Madoff, and I had to sell that condo and moved in with my boyfriend,’’ Wernick said. “I also had to sell all my paintings.’’

Despite the efforts of Lt. Samsel and his detectives, the stolen paintings were never recovered, Samsel said. Because of the transient nature of moving companies and their employees — they travel from one new city to another and change employers often, Samsel said — the investigation turned up no specific suspects.

“The bottom line was the list of potential suspects was 100-plus,’’ Samsel said. “That left all kinds of loopholes for the who and the when.’’

The investigation was fully stalled after about 10 or 12 months, Samsel said. Even now, with new information about the potential suspects, the statute of limitations on prosecuting the theft has run out, so it would be impossible to charge someone, he said.

“It’s a unique case. We don’t handle high-end art very often,’’ Samsel said. “I’ve been playing this game a long time, and this is one of those cases I never stopped wondering about.’’

The wondering ended when a federal prosecutor in Alaska contacted Samsel in late 2011 to tell him the paintings were recovered as part of an investigation of illegal animal parts sales.

It’s unclear exactly who first nabbed the artwork or when. But a wildlife investigator, who worked on the case and asked not to be named because of his work, said Leboeuf told him his half-brother and some cousins grabbed the paintings during a party with the original thieves, who stole them from Wernick.

According to the Tuesday federal court filing in Alaska, Leboeuf told undercover agents in 2010 he bought the paintings from the half-brother, a man named Mario Murphy, for $100,000 worth of gold and silver at some point in 2006.

The court papers say Leboeuf first mentioned the paintings in a 2010 conversation with undercover federal agents, to whom he was plotting to sell illegal ivory from walrus taken at Saint Lawrence Island. The agents spent the night at the Glennallen home on several occasions, the court filing says.

The investigator said Leboeuf’s rambling about the paintings seemed hard to believe— at first.

Leboeuf showed the agents pictures of the paintings and claimed the artwork’s value at $30 million. He said he was willing to take $1 million, and if the undercover agents could find a buyer, they’d get a finder’s fee, too, the court papers say. Leboeuf later showed them two of the paintings: “Milton,’’ by Lucien Pissarro, and “Cattle And Figures in a Farmland,’’ by William Payne.

Instead of selling the paintings for Leboeuf, federal agents raided his house in April 2011 after a nine-month investigation. They arrested him and Sternbach and found 20 guns, 30 marijuana plants, some coca plants intended for cocaine production, and an unregistered, fully automatic machine gun, according to court documents filed by prosecutors.

In the plea deal, Leboeuf was sentenced to nine years in prison, and Sternbach to 31/2 years.

While the paintings remain with the U.S. Fish and Wildlife Service, a federal attorney has filed a motion to have the artwork placed in the custody of the insurance company that paid the theft claim. That could be completed within a week or two, but the forfeiture process to determine the final ownership of each painting could take more than a year, according to the U.S. Attorney’s Office.

Wernick says all five once belonged to her, and she hopes to own them again.

With the deal in place, the stolen art surfaces in the Corsican capital Ajaccio car park, an Art Hostage style recovery, no stings, no set ups, no arrests, just recovery of the art and the agreed negotiated deal honored.